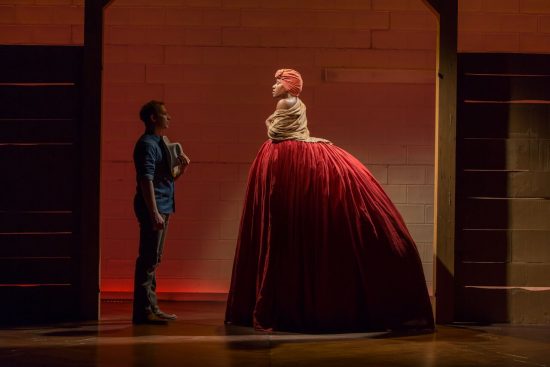 Whether you end up a Yankee or a Confederate, hold onto your hats during the Ars Nova production of “Underground Railroad Game.” This month’s installment of Woolly Mammoth Theatre Company’s 2017-2018 season is chock full of provocative scenes and unexpected twists towards taboo territory.

Co-created by Jennifer Kidwell and Scott R. Sheppard, and directed by Taibi Magar, the Obie Award-winning “Underground Railroad Game” meshes race, sex and power dynamics in what seems, at first, to be a PG-rated, audience participation-based story.

“Underground Railroad Game” is sure to shake up the subconscious, providing plenty of food for thought to chew on for hours, if not days, later.

The show starts off with a reenactment scene, Sheppard as an abolitionist, Kidwell as a slave. But just as they settle into these characters, the lights brighten and Caroline (Kidwell) and Stewart (Sheppard), teachers at Hanover Middle School, announce the game. They split the class (audience) in two, dishing out details on how to earn points, save (or capture) slaves (ragdolls) and ultimately win the war.

Their decision to use ragdolls stems from Sheppard’s fifth-grade experience. His teachers, as Kidwell points out in the program, tried “to teach about the objectification of the body and the objectification of labor and race.” Demonstrating this on set, Stewart aggressively throws the dolls into the safehouse, while Caroline carefully tucks them into her sweater.

The premise of the story seems to revolve around the game, but the audience soon learns of Caroline and Stewart’s mutual interest in one another. Dialogue quickly escalates from modest teasing to stereotyping to insults, all of which seem to turn each other on more than off. As time goes on, their interracial relationship goes further into exploring sexual boundaries and power shifts.

Using silent, eye-bulging stares and name dropping tactics, Sheppard and Kidwell are convincing in their roles as teachers. While their chemistry felt a bit forced at times, this lent to unforgettable awkward moments, particularly after the above scene.

The presence of the two flags and eye-squinching, fluorescent lights made it easy to distinguish classroom moments from dreams or historical reenactments. If not for Steven Dufala’s scene design or Oona Curley’s lighting choices, the fluidity of the scene changes and shifting timeline from present to past could have been difficult to follow.

“Underground Railroad Game” is sure to shake up the subconscious, providing plenty of food for thought to chew on for hours, if not days, later. It’s best to come prepared with an open mind. Some may find certain scenes squeamish, otherwise may marvel at how far this off-centered comedy dared to go.

Advisory: Profanity, racial slurs, nudity and sexual content. This show is recommended for audiences 18 and over.

“Underground Railroad Game” plays until April 29, 2018, at Woolly Mammoth in Washington, DC. For more information or to purchase tickets, call the theater at (202) 393-3939 or click here.