Theatre Review: ‘Vanya and Sonia and Masha and Spike’ at Vagabond Players 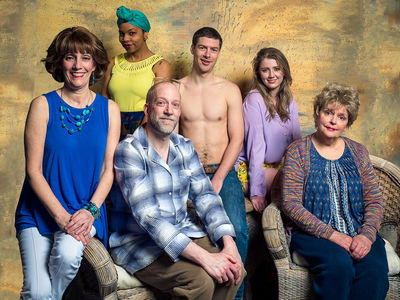 Cast of Vanya and Sonia and Masha and Spike. Bruce F Press Photography.

A few months ago, I decided to read Christopher Durang’s play “Vanya and Sonia and Masha and Spike.” In those pages, I wasn’t exactly sure of what I read. I just didn’t get it. There was a great deal of chatting, and not much action. After seeing it performed by the Vagabond Players, I’m happy to say that it makes much more sense in context. It seems that this play is just one those shows that needs to be seen to be understood fully.

I’m always shocked when I see what actors can do with text that I’ve only read. Not once as I read the piece did I think it was laugh out loud funny. But what these actors saw in it and brought to it on stage was quite different than anything I had imagined. And as such, the play is so much better with these particularly gifted actors reciting its lines.  Eric C. Stein & Lynda McClary playing Vanya and Sonia respectively, are highlights of the piece. Both actors are committed to their roles thoroughly and flawlessly handled the quite wordy play. Sonia’s scatterbrained annoyance, is delivered with gusto. McClary’s ability to be fully in the moment in each and every scene she’s in, shows just how strong of an actor she is. She nails every scene, but it never appears as she’s acting at all.

While the actors bring the work to life, the costumes and set are yet another aspect of what makes this production stand out.

Stein is always a highlight of Vagabond shows. He has an innate ability to be a calming influence throughout the shows he’s performed in. His characters never have the largest personality, but you’re drawn to the work he’s doing, thanks to his presence on the stage. In this production, Vanya is the axis of the show – staying calm while madness ensues around him. Stein remains effortlessly exasperated, but fully engaged throughout the show.

Masha – the hurricane of a sister that upends Vanya and Sonia’s quiet life is hilariously played by Holly Pascuillo. She seems to dive into the part of a narcissistic actress with both feet. She commands the stage just as Masha claimed to do, and her commitment provides most of the comic relief. Her chemistry with her slightly dimwitted hunk of a boyfriend Spike (Lansing O’Leary) is believable. Their often-embarrassing displays of affection for each other are a sight to behold – for the audience and the rest of the family alike.

Added to the circle of madness surrounding this cast of characters on an ordinary weekend in the country, is their housekeeper Cassandra (Rachel Reckling) who claims to be an amateur psychic. She spends the play informing everyone to beware of everything in hilariously long-winded speeches. Finally, there’s Nina (Grace O’Keefe), the young visitor who just wants to meet her idol Masha but spends most of her time with her newly adopted Uncle Vanya, when she realizes Masha is a bit of a train-wreck.

While the actors bring the work to life, the costumes and set are yet another aspect of what makes this production stand out. For such a small stage, the set perfectly captures an ordinary living-room where two spinsters spend their days. Though the true highlight of the show are the costumes, including at one point a scene where everyone is dressed in elaborate Disney-themed costumes for a party, are impressive in every way. This attention to detail – in what a Hollywood actress may wear on her day off, to the dressing gowns that an older gentleman may wear to bed – helped to sell the story of this family and brought the production up to another level entirely.

While I enjoyed everything about the actors and the set and the costumes, in the end I still found myself confused for the most part by the plot. After almost 3 hours, nothing much had changed. The characters argued and plotted and preached but never seemed to make any headway in improving their lives. Vanya and his sister Sonia would still continue to live in the farmhouse in Buck’s County – though, with the addition of Masha moving forward. Yet, for the most part, aside from possibly getting jobs to help pay for the house, they made the decision to continue to live their lives as they had been. A story without progress seems a bit weak in my opinion. Though, thanks to the stellar work of the cast and creatives of Vagabond’s production, the show was everything but weak.

Running Time: Approximately 2 hours and 45 minutes with one intermission.