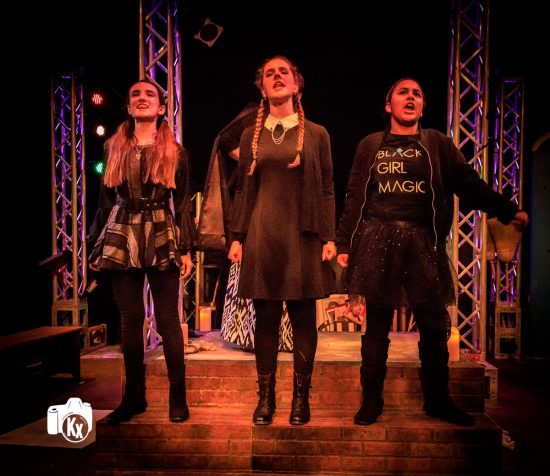 Creative Cauldron’s new musical, “Witch” certainly lives up to its billing as a bold new work, offering audiences an evening of memorable music, great acting, and moments of laugh-out-loud hilarity.

Set at the Women’s March in Washington, D.C., three generations of women gather to protest women’s inequality with signs, bull horns, and the odd pointed witch’s hat.  All are not in agreement, however, about how best to communicate their message, the younger generation bristling at their mother’s protest tactics, the grandmother of the group insisting on her own occasionally clashing vision for how to move forward.

…an evening of memorable music, great acting, and moments of laugh-out-loud hilarity.

In between protesting and arguing, the group travels back in time, conjuring the stories of women who, having been identified as witches, met their ends tied to a burning stake.  This is not, sadly, a phenomenon found only in history books.  Amidst the music and humor, the cast deftly addresses the seriousness of women’s second-class status: women are still being accused of witch craft today, and they are still losing their lives as a result.

The musical numbers are tuneful and memorable, in part because they are so well-delivered by a cast with a remarkable degree of vocal talent.  Iyona Blake (Destiny) brings down the house with “Sweep Them Out/ The Tale of Current Times” a song that encourages women to wake up in the morning, get on their brooms, and go vote.  Susan Derry (Maggie) performs “Hollywoodland/The Tale of Margaret Hamilton” with passion and commitment, and the incomparable Florence Lacey (Becky) treats the audience to her soaring soprano in a rendition of “Innocent/The Tale of Rebecca Nurse.”

The set is simple, yet brilliant.  Margie Jervis (scenic, prop, and puppet design) managed to assemble all of the elements of a good protest march, including a port-o-potty, into which the entire cast files after the final curtain call.

The creative team of Matt Conner (music and lyrics, co-director) and Stephen Gregory Smith (book and lyrics, co-director) have given the women’s movement a gift to enjoy for years to come, and perhaps even a measuring stick of sorts.  With some luck, we might just find ourselves at a future production of “Witch” marveling that there ever was such a time, such a place, such a story.

Running Time:  Approximately 1 hour and 10 minutes with no intermission.