1. “Sweeney Todd: The Demon Barber of Fleet Street” by The Arlington Players. 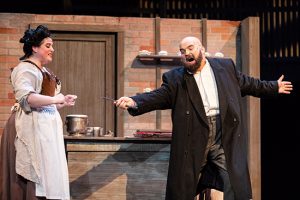 “‘Lucky Stiff’ is a ton of fun and has a lot of heart.” – Elle Marie Sullivan.

Synopsis: Based on the novel, The Man Who Broke the Bank at Monte Carlo by Michael Butterworth, Lucky Stiff is an offbeat, hilarious murder mystery musical farce, complete with mistaken identities, six million bucks in diamonds and a corpse in a wheelchair. The story revolves around an unassuming English shoe salesman who is forced to take the embalmed body of his recently murdered uncle on a vacation to Monte Carlo. Should he succeed in passing his uncle off as alive, Harry Witherspoon stands to inherit $6,000,000. If not, the money goes to the Universal Dog Home of Brooklyn…or else his uncle’s gun-toting ex! 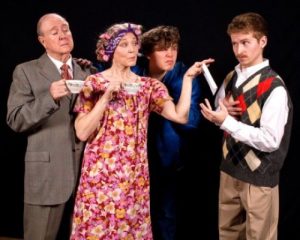 “There is genius in a script that lets the words weave a cover of lies and half-truths while unraveling in the spaces between.” – Mary Ann Johnson.

Synopsis: In the midst of the holiday bustle, young Brooklyn couple Elias and Jenny escape on a much needed getaway to a cozy bed-and-breakfast in Gettysburg, Pennsylvania. However, under the watchful eye of the cheery, if slightly off, innkeeper, a ghost seems to haunt their crumbling relationship. With her trademark rough-edged humanity, observant humor and lyrical beauty, The Flick playwright Annie Baker blends the hyper-real with flickers of the supernatural in a quietly suspenseful and transfixing work. 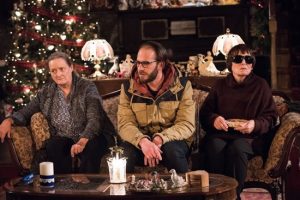 4. “Soon” at The Highwood Theatre.

“…“Soon” offers a chance to see four rising talents in a clever show by another theatrical voice on the rise.” – Peter Orvetti.

Synopsis: Caution: all water on earth is about to evaporate, and the world is approaching its catastrophic end. So what next? Enter Charlie, a 20-something woman afraid to confront the outside world. After its world-premiere at Signature Theatre in 2015, Highwood puts a fresh take on Nick Blaemire’s uplifting musical about a woman, her goldfish, and the life she is missing just beyond her doorstep. 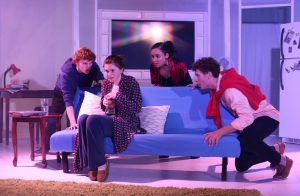 5. “Into the Woods” at Memorial Players.

Click here for more information on show times and VIP receptions. Tickets to the show are all FREE!

Synopsis: The musical intertwines the plots of several Brothers Grimm and Charles Perrault fairy tales, exploring the consequences of the characters’ wishes and quests. The main characters are taken from “Little Red Riding Hood”, “Jack and the Beanstalk”, “Rapunzel”, and “Cinderella”, as well as several others. The musical is tied together by a story involving a childless baker and his wife and their quest to begin a family (the original beginning of The Grimm Brothers’ Rapunzel), their interaction with a witch who has placed a curse on them, and their interaction with other storybook characters during their journey.