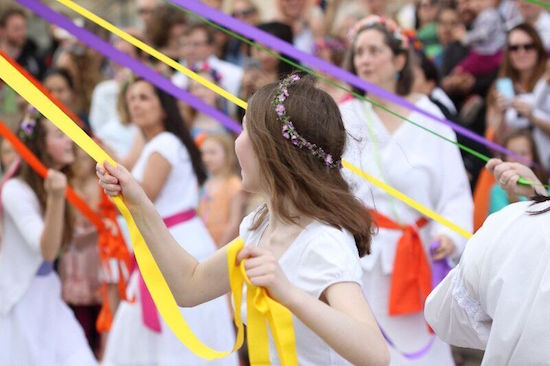 Performers of the Washington Revels. Photo by Fritz Meyer.

In the Middle Ages, the English people would venture out into the woods and fields on the eve of May 1st to “bring in the May.” They would gather flowers and greenery, bringing them back before dawn. Families in England would decorate their homes with bluebells and orchids, foxgloves and ivy as the sun rose on May Day, a celebration of spring’s arrival that continues around the world today.

The Washington Revels, a community performance group, “brought in the May” with the annual “May Revels” celebration at the Washington National Cathedral’s Flower Mart this weekend. Children carrying garlands and green arches, women wearing flower crowns, and men dressed in long white robes led an audience of mostly families up the Cathedral West Steps and into the sanctuary. The performers — most of them children between ages five and fifteen — process to the front, singing and dancing, while we settled into our seats.

“We would like to welcome you to spring!” artistic director Roberta Gasbarre announced, arms raised. Reading from a scroll, she told a story about dames, spirits, and the ancient rights of spring, when “life, light, and simple joy undo the cold that would destroy.”

…she told a story about dames, spirits, and the ancient rights of spring, when ‘life, light, and simple joy undo the cold that would destroy.’

In line with traditional May Day celebrations, the Revels’ performance included the crowning of a May Queen, the Maypole, and a Jack in the Green (a performer wrapped in foliage). The children waved garlands and skipped around each other. They played kazoos and sang sweet songs in high-pitched voices. A chorus of bass singers and sopranos rounded out the sound. A violinist, an accordionist, and a woman with a tambourine accompanied them. Each song seemed no longer than three minutes.

At one point, the performers called on us to sing an old English round with them. A woman sitting behind me said to the person beside her, “Sometimes I really wish I could sing.” She had sung in the choir as a child, she explained, but that was before she cared what her voice sounded like.

I knew what she meant — the years before we learned to be self-conscious about our voices, before we even thought to listen to them.

But for me, with spring air filling the Cathedral, sunlight twinkling in the stained-glass windows, and green vines growing up the Gloria in Excelsis tower, those years felt as near as ever.

The Washington Revels’ lighthearted performance of the simple joys of spring brought us, at least as long as the dance lasted, to a place of greater simplicity ourselves.

The Washington Revels celebrated “May Revels” on May 5, 2018, at Washington National Cathedral as part of the annual Flower Mart. Learn more about the Revels online.