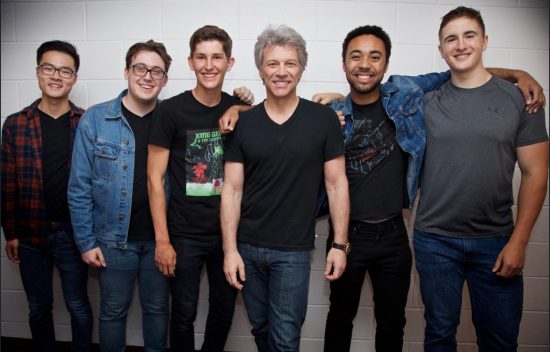 Bon Jovi’s final stop on their American “This House Is Not For Sale” tour was Monday night, May 14, 2018 at Capital One Area in Washington, D.C. and local band NBTF, made up of Virginia high school students, got the chance of a lifetime to open the concert for 20,000 Bon Jovi fans thanks to winning the rock band’s opening act contest.

The group is the winner of the 2017 Loudoun Youthfest Battle of the Bands and has been playing together since 2015. They performed a 20-minute set of four original songs including the song “Broken Child” which was their audition piece for the contest. Their first song, “Window,” featured lead singer Zach Jones both rapping and singing and demonstrating a maturity in his vocals that belied his age. Lead guitarist Nick Beers was exceptional, evoking a remarkably soulful and lyrical sound reminiscent of Richie Sambora mixed with technical finesse that brought echoes of Prince into the arena.

The band met Jon Bon Jovi and guitarist Phil X before the show, and in their own words “both of them were very cool people and gave us very sound advice to ease our nerves and encouraged us to go out there and put on a show.” And put on a show they did, playing with incredible poise and energy, so much so that the arena audience was audibly surprised and supportive when Jones shared before the final song that NBTF band members were all still in high school.

NBTF shared with MD Theatre Guide that their “community has been beyond supportive, and we would love to give a huge thank you to Loudoun Youth for arranging so many amazing media opportunities leading up to the show.  It feels incredible to have the support of our friends and families behind us as we’re out trying to fulfill our passions.”

To watch a video of NBTF opening for Bon Jovi and for more information about the band, visit their website.