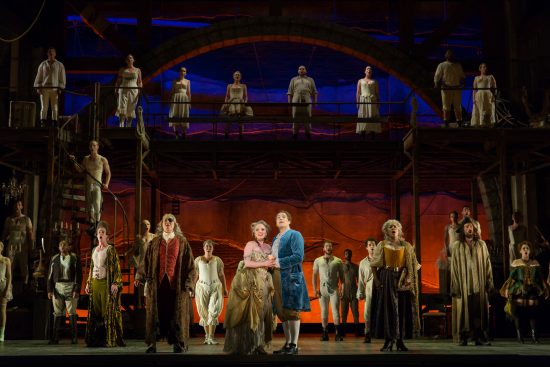 The operetta, “Candide,” written in the 1950s by Leonard Bernstein, is a story based on Voltaire’s novel by the same name. Candide is a simple young man determined to think that this world is “the best of all possible worlds.” We watch as Candide is subjected to horrific events while on his journey to find his love, Cunegonde. He barely survives, all the while believing that his misfortune must be for the best. Candide becomes the definition of optimism. The story of “Candide” brings light to the evil in this world and allows us to own up to it and deal with it.

Bernstein went through quite a journey himself in creating “Candide.” It took many years and many choice writers and librettists for him to get to the finished product. Some different versions have been performed over the centuries, but in this production, you will hear Bernstein’s intended fuller orchestration, giving us a more operatic operetta.

WNO’s “Candide” was a fantastic interpretation of Voltaire’s classic story and a colorful offering of Bernstein’s epic score.

This was The Kennedy Center’s celebratory year for Leonard Bernstein’s centennial. Washington National Opera was sure to please the audience with their hysterically comedic production of “Candide.” Francesca Zambello gave us a beautifully crafted visual of the iconic tale’s irony. Outbursts of laughter were well deserved for the production’s well-timed jokes.

Despite a couple of hesitations in the dialogue; the staging, sets, and chorus numbers operated like a well-oiled machine, all for the purpose of producing one ironic joke after the other. The set was a multifunctional conglomeration of moving parts. Everything looked dirty and old to perhaps represent the dirty injustice of this world. Even when Candide and his friends traveled to the new world to find a better life the new backdrop was revealed to show only a beaten up brick wall suggesting the new world was just as sinful and corrupt.

The first sounds of the orchestra, masterfully led by Nicole Paiement, soaked us with “Candide’s” sumptuous overture, which almost immediately introduced us to our narrator, Voltaire, played by Wynn Harmon. This character is shared with another, Dr. Pangloss, who is responsible for teaching Candide that this world “is the best of all possible worlds.” Harmon jumped back and forth into the two characters effortlessly, both conducting the action taking place and throwing himself into the mix.

Maximilian, sung by Edward Nelson, had comedic timing like no other and sung with a glorious rich baritone voice. Emily Pogorelc, singing the role of Cunegonde, sang her show-stopping aria “Glitter and be Gay” with strength and agility. Her effortless coloratura brought the house down with wondrous applause. World-renowned mezzo-soprano, Denyce Graves made a commanding presence on stage as The Old Lady, throwing out jokes left and right about her one missing buttock. Her crowd-pleasing aria “Easily Assimilated” showed us how Graves so easily assimilates to any role she commits to.

Singing the title role, Alek Shrader was a standout performer as he sang his arias so tenderly and yet became more and more hilarious as the night grew on. The colors in his voice were unending and overall Shrader was a joy to watch and listen to.

A dismal street sweeper named Martin, sung by Matthew Scollin, whose character wasn’t introduced until the 2nd act surprised us with his full bass-baritone voice. Shrader, Pogorelc, Nelson and Scolin all made their WNO debut and will hopefully be invited back in the future to delight us once again. Each soloist of the night deserved praise as everyone was perfectly cast. Even the chorus, smaller than most opera choruses, brought the scenes to life.

“Candide” shows us two sides of the spectrum. A jovial and optimistic Dr. Pangloss, whose explanations for the most sinful acts and events seem absurd or Martin, a dreary man who clings to pessimism and refuses to see the good in anything. Neither way of thinking is right so Candide asks us a difficult question. How does one cope with the evils of this world? Is there hope for mankind? In the final number, “Make Our Garden Grow” the characters suggest “We’re neither pure nor wise nor good, we’ll do the best we know. We’ll build our house and chop our wood, and make our garden grow.” As the orchestra cut out and the cast sang acapella, the audience was overwhelmed with the glorious sounds of truth in the final chorus.

WNO’s “Candide” was a fantastic interpretation of Voltaire’s classic story and a colorful offering of Bernstein’s epic score.