Opera Review: ‘The Barber of Seville’ by Washington National Opera at The Kennedy Center 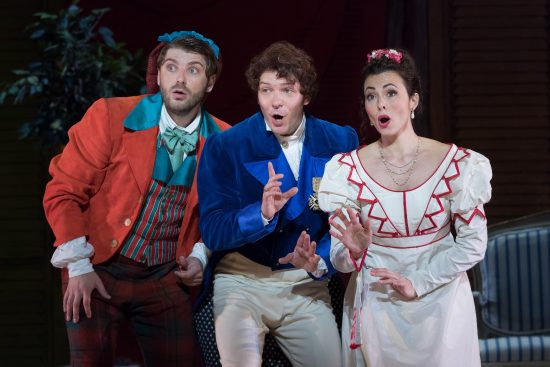 The Kennedy Center’s Opera Theater was buzzing with anticipation Saturday evening for the opening night of Washington National Opera’s “The Barber of Seville.” This opera buffa is Rossini’s take on Pierre Beaumarchais’s French comedy, “Le Barbier de Séville,” and is sung in Italian although set in Seville, Spain. Including opera favorites such as ‘Largo al factotum’ and ‘Una voce poco fa,’ WNO’s delightfully witty adaptation of Rossini’s time-honored classic left a smile on the face of every listener.

As is typical of most 19th century Italian opera, this cast’s main players include a quick-witted knave, a maiden in distress, and a lovesick tenor and their bumbling efforts in search of true love and good fortune.  Leading this dynamic trio, is the local barber and jack-of-all-trades Figaro whose utilizes his sharp wits and clever schemes to assist Count Almaviva to woo the object of his affection, the fair Rosina. Rosina’s controlling ward, Dr. Bartolo, has different plans, however, and is in cahoots with Don Basilio, Rosina’s music teacher, to thwart plans for Rosina to be married to anyone other than himself. Hilarity and mischief ensues in a classic battle of the wits as each group attempts to outfox the other.

…WNO’s delightfully witty adaptation of Rossini’s time-honored classic left a smile on the face of every listener.

Moldovan baritone, Andrey Zhilikhovsky, leads this talented cast and is absolutely everything an opera lover could want Figaro to be. Clever, greedy, charming, Zhilikhovsky’s American debut as Figaro was a tour de force for the baritone, whose acting chops were equaled by his incredible voice. World-famous American mezzo-soprano Isabel Leonard infused her Rosina with a sense of moxie giving the young ingenue a stunning depth of character. Leonard’s attention to detail both in navigating through Rossini’s challenging technical passages while maintaining her gorgeous tone and in finding moments to bring out snippets of Rosina’s sassy personality are signs of a true seasoned professional.

Taylor Stayton excels as the smitten Count Almaviva and despite a somewhat cautious start, the fullness and excitement of his bright tenor timbre were attained after his entrance disguised as Don Alonso at the top of the second act. Paolo Bordogna’s sense of comedic timing as Dr. Bartolo left the audience in stitches, while his partner in crime, Wei Wu as Don Basilio, filled the room with his jaw-dropping bass voice. Not to be overlooked is Domingo-Cafritz young artist Alexandria Shiner as Berta who unexpectedly brought down the house with the strength and clarity of her impressive voice during Berta’s aria, “Il vecchiotto cerca moglie.”

Director Peter Kazara takes a classic approach to both set and costume and hones in on interpreting the comedic opportunities available in the score through subtle character choices and elements of dance. The choreography by Rosa Mercedes brought much-needed life into the long final numbers at the end of each act. Emily Senturia makes her WNO conducting debut as a last-minute replacement and her under her baton the WNO Orchestra dances their way through Rossini’s dazzling score with both nuance and vigor. The WNO Chorus also brings this same sense of vitality to the stage when they flood the scene as a musical troupe in the opening act and return for the finale as an intimidating police force.

The familiar tunes, sensational singing and perfectly executed comedy make WNO’s “The Barber of Seville” a family-friendly classic that should not be missed!

Advisory: Performance is in Italian with projected English titles.

“The Barber of Seville” is playing at The Kennedy Center’s Opera House in Washington, D.C. through May 19, 2018. There will be a WNO Domingo-Cafritz Young Artists performance on May 17. For tickets or more information, click here.