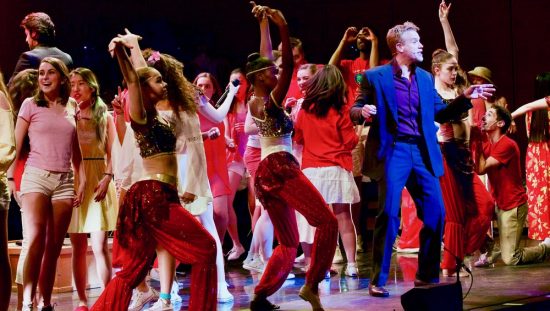 YAA Students performing with ADAM PASCAL in The Circle of Life: The Songs of Tim Rice in Concert – 2017

The news came from the National Capital Chesapeake Bay Chapter of the National Academy of Television Arts & Sciences (NATAS) and was announced on May 16th. The annual competition is open to any television station, company, production house, or independent producer in Washington, D.C., Maryland and Virginia. The one-hour performance, hosted by Sir Tim Rice, featuring the talents of over 150 YAA students, was conceived for YAA/MPT and directed by London theater director Hugh Wooldridge (Chess in Concert, An Evening with Alan Jay Lerner, The Music of Andrew Lloyd Webber).

The broadcast offered performances of 12 iconic songs, many of which earned Rice Tony Awards® and Oscars®. Now, this world premiere television production has earned three Regional Emmy® nominations for YAA and MPT in the categories of

The program is the only one nominated in the category for Lighting.

“We couldn’t be more thrilled about this news,” says Rolando Sanz, YAA’s Co-Founder and Producing  Artistic Director. “It’s not every day that middle and high school students get to be the stars of an Emmy® nominated production, and we are honored to give them this opportunity and so grateful to our gifted and committed production team and partners at MPT.”

YAA’s partners and co-producer, Maryland Public Television (MPT) has earned 20 nominations this year, including for Station Excellence and Community Service. The NATAS chapter’s Emmy® Awards gala takes place on Saturday, June 23 at the Bethesda North Marriott Hotel, Conference Center, and a three-hour telecast of the ceremony will air on MPT2 on Friday, June 29th at 8:00pm.