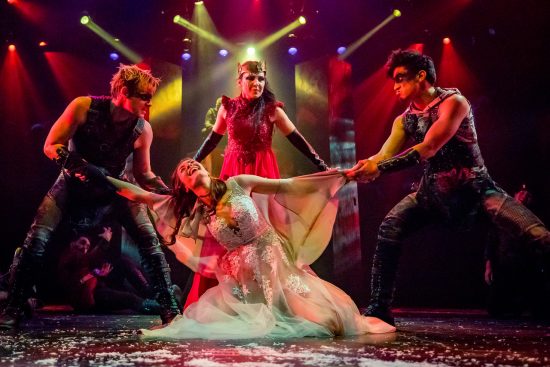 “Titus Andronicus” may well be the original telenovela, soap opera, and forerunner to many a horror film adapted from Poe’s works. For over three centuries, Shakespearian scholars have argued whether or not he wrote it, and basically “what was he thinking?” Well, it doesn’t matter what he was thinking. Synetic Theater’s production is a bravura performance that brings to full, bloody, gory, phantasmagorical life this play. It is this year’s silent Shakespeare from Synetic.

This play is beautifully adapted to the muscular, soaring physical theater that Synetic specializes in.

Basically, it’s politics and revenge. The Romans are fighting the Goths. Titus Andronicus brings back a trophy from battle—Queen Tamora of the Goths, her two sons and her companion, Aaron. He arrives as the Senate is fighting over who should be the next emperor—one of the two brothers, Saturninus and Bassianus. Titus’ sister, Marcia, is presiding over the mess and when big brother comes home, she leaves it to him. That sets in motion the mother of all revenge stories. It’s not giving any spoilers away to say that this won’t end well.

This play is beautifully adapted to the muscular, soaring physical theater that Synetic specializes in. Even what would seem to be a romantic evening as Tamora manipulates Saturninus into wedding her is a prelude to a battle; the tango they dance is a meeting of equals. The action takes place on a deceptively simple, menacing set that serves as forest, battlefield, Senate, caves, and finally, the most horrific dinner party in history. Scenic designer and technical director Phil Charlwood, lighting designer Brian Allard, and costume designer Erik Teague create a grim, shadowy world that provides a chilling playground for the murderous machinations. Synetic proves that you don’t actually have to use blood—fabric has never been more terrifying.

The play is directed by Paata Tsikurishvili, choreographed by Erinia Tiskurishvili, and adapted by Emily Whitworth. The fight choreographer is Vato Tisikurishvili and the movement director, Alex Mills. These professionals manage to evoke so many feelings, from sorrow to revulsion without words that the emotional rawness of the work can almost literally pin one in one’s seat.

As Queen Tamora, Irina Tsikurishvili, moves in ways that are positively feline. During the tango with Saturninus (a besotted and bloodthirsty Dan Istrate), she climbs him like a scratching post and coils her leg behind him so languidly as he lifts her that it perfectly encapsulates the trap she is setting.

As Titus Andronicus, Philip Fletcher embodies a Roman officer and man of honor. He is so bound by the tenets of his station and occupation he sacrifices his left hand to try to save the life of his son, Quintus, who has been framed for the murder of Bassianus (the brother who didn’t get the crown, played by Scott Whalen). You see his journey from a true believer in the system he has fought for to a man forced to confront the underlying corruption—in the final scenes he almost glitters with rage.

As Lavinia, Irina Kavsacize gives a mesmerizing performance. Her movements from dutiful, girlish, supportive wife of Bassianus to traumatized, mutilated and maddened shade of herself, are heartbreaking and harrowing. One can almost see the beginnings of Shakespeare’s Ophelia in her journey.

The cast is rounded out by Audrey Tchoukoua as Aaron (warrior to and lover of Tamara); Dallas Tolentino as Demetrius (a son of Tamara); Alex Mills as Chiron (another son of Tamara); Tori Bertocci as Marcia; Chris Galindo as Lucius; Scott Turner as Alarbus/Ensemble (the first son of Tamara killed by Titus as a sacrifice for the son of Titus killed by Tamara in the battle); Matt Stover as Quintus/Ensemble; and Suzy Alden, Megan Khaziran and Nutsa Tediashvili as the rest of the Ensemble. Particularly during the opening battle scene and as the senators, the ensemble moves with a single-minded ferocity in beautiful unison.

This is a beautiful, brutal, sheerly physical tour-de-force that streamlines the many plot points of the play. In doing so, it brings the utter madness of the plot into stark relief without words to get in the way. This is a most visceral production.

Advisory: Recommended for ages 16 and up due to mature content.