Theatre Review: ‘A Night on Broadway’ at Newtowne Players 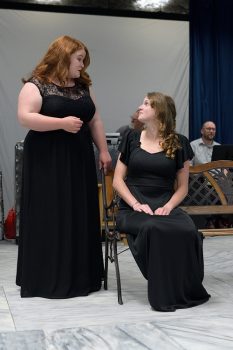 Stephanie Taubert and Autumn Mallory take on the roles of Jo and Beth March in “Some Things Are Meant to Be” from Little Women, The Musical. Photo courtesy of Bryan Ramsay.

Picture all of your favorite songs from famous Broadway shows on the same soundtrack. That would be incredible, wouldn’t it! Now imagine that instead of just shoving your ear-buds in and listening to famous singers perform those familiar favorites, you could see those favorites brought to life by a talented troupe of community theatre vocalists, musicians, dancers, and thespians.

Well, Newtowne Players, located in Lexington Park, MD, has done just that with their musical revue “A Night on Broadway.” This show will be performed May 11-20th, and this is a revue you do not want to miss. This is the third year that Newtowne Players has put on their revue, featuring a cast of fabulous performers each year. If this year’s performance is any indicator of the past two, I can see why this is an audience favorite.

“This show is truly soundtrack worthy!”

Thomas Esposito, director, and Dawn Weber, artistic director, have put together a line-up of songs that will have your toes tapping and take you on a journey through Broadway’s headliners. Featuring a wonderful combination of old favorites and new soon-to-be favorites, this show will have something for all generations and genres of music lovers. Included in this star-studded line-up are songs from “Something Rotten,” “Dear Evan Hanson,” “Chicago,” and “My Fair Lady,” just to name a few.

Of course, the song choice is only as good as the musicians and singers who bring it to life, which brings me to the orchestra, small in number but mighty in sound and talent. This orchestra was led by Diane Trautman on piano and featured six other talented musicians that set the tone for the evening with their delightful music. They were featured at the back of the stage, entirely visible to the audience, which really gave a wonderful sound and sight to the performance.

The cast, also small in number, featured 10 performers. The night that I went actually featured only 9 of the 10, as one was out of commission for the night, and I would never have known there was an additional performer. The cast filled in and covered her songs beautifully. As the performance went from opening to closing, I kept uttering to myself the word “WOW.” This cast is not only filled with talented singers whose voices simply deserve a Tony, but also with dancers and actors who take those voices and bring wonderful emotion and movement along with them!

Kristin Kauffman, choreographer and cast member, performed a jaw-dropping rendition of “I Could’ve Danced All Night” from “My Fair Lady.” Shawn Davidson brought the house down with his performance of “It’s Hard to be the Bard” from “Something Rotten.” Eddie Carter crooned his way through “Those Magic Changes” from “Grease.” Sarah Gravelle brought the audience to tears with “Will You Love Me Tomorrow” from “Beautiful.” These are just a few of the talented performers who graced the stage during the revue.

For me, my favorite performance was by Stephanie Taubert and Autumn Mallory. They delivered a pitch-perfect, stunningly touching rendition of “Some Things are Meant to Be” from “Little Women.” The emotions they were able to capture through their voices were tear-jerking, and the staging of the entire performance was simply perfect. I have never had a single song simply reduce me to tears like this one did! These two young women are so talented!

The set was simple, featuring the orchestra at upstage center, two walls with titles of the shows on them on either side of the stage, and a PPT screen that was used to post the song title, show, and performer (kudos to Hayley Gallagher and Casey Page for developing the delightful slideshow). The lights were aptly suited to each song, especially the blue light featured in “You Will Be Found” from “Dear Evan Hanson” (kudos to Megan Pobst for this choice!). The choreography was fun, edgy, and added so much fun to each performance. During “Marry the Man Today” from “Guys and Dolls,” Kauffman and Taubert were so perfect in their timed movements that I forgot I wasn’t sitting in a Broadway show house! The props and costumes used throughout the show were subtle, fun, and added just the perfect amount of character to each performance. Everything worked together perfectly and made this show a magnificent success!

Any musical theatre lover will be delighted to attend Newtowne Players’ third Broadway revue, “A Night on Broadway.” This show is soundtrack worthy, and I would gladly purchase one if they made a soundtrack available. I urge you to go and enjoy this gem of a show. This show is not just “Another Op’nin’, Another Show,” but Broadway brought to you “On the Street Where You Live.” “A Night on Broadway” at Newtowne Players is one show you do not want to miss!

“A Night on Broadway” will be playing at Newtowne Players in Lexington Park, MD from May 11-20th, 2018. For more information, or to purchase tickets, please see here.