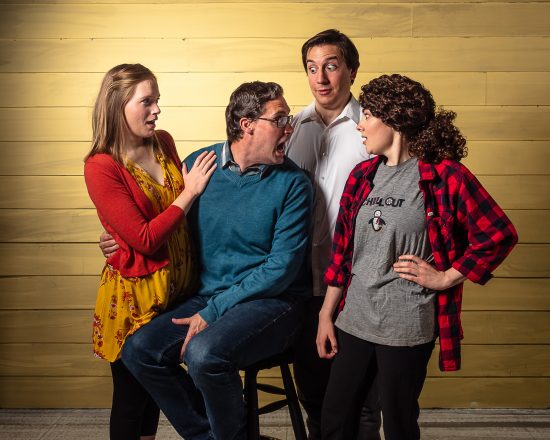 A play called “Bad Jews?” The title kinda grips you from the get-go, and in the production of it currently running at Vagabond Players, the title is only the beginning. The whole thing grabs hold of the audience, shakes us like a dog with a really tasty bone, and rarely let’s go. This is some heady stuff, with some heavy topics being covered, and all of it wrapped in a humor that is as good as I have seen on any stage.

Joshua Harmon’s darkly hysterical play premiered Off-Broadway in 2012, being nominated for a handful of awards.  The author says he was moved to write the piece after attending the funeral of a Holocaust survivor where the grandchildren spoke.  In his play, the drama centers on who is ultimately most deserving of a beloved family heirloom, a piece of jewelry the late grandfather of the fictional family managed to hide from the Nazis during his internment by keeping it in his mouth. With his passing, his three grandchildren have come together the night after the service, along with the fiancé of the oldest, and are spending the night together in a New York apartment.  Four distinct personalities and perspectives alternately shout, proselytize, apologize and attempt to explain some very deep-seated emotions in so raw a fashion that it at times makes the audience cringe with the soul-baring honesty.  But far more often, it just made us double over in laughter.  I know, that seems weird, but you have to see it to get it.

…one of the funniest pieces I’ve seen in a long time.  So go, already.  Don’t miss this one.  ‘Bad Jews’ is a very good time.

Vagabond Players has shown once again why it’s one of America’s longest-running theatre venues.  They have employed the formidable Miriam Bazensky to helm this production and she is remarkably capable of handling the piece.  In a less experienced director’s hands, the evening could quickly devolve into a screaming, hot mess.  But Bazensky’s skill is as sharp as a surgeon’s.  Her pacing is absolutely spot-on.  Sure, the script has built-in ramp-ups and cool-downs in the dialogue, but it takes a director like this one to guide the actor’s timing.  It might have been nice to have a little more mood music, but the mood was appropriate to the action and kept the piece from being too overtly ‘theatrical’ and much more real.

Moe Conn’s set fit nicely into the small theatre space, using soft colors on the walls, a visible night skyline of New York glimpsed through a window, a full-sized pullout couch, and a bar to create a typical millennial’s apartment. Marsha Miriam Grady does a fine job with the lighting and even the subtle sounds of the video game one of the cast plays are given just the right touch by sound designer Eric C. Stein.

With a cast of only four actors, all of whom are on stage for most of the action, it is critical to have a sense of the chemistry between them, and this ensemble is superb (again a hat off to Bazensky for casting.)

As the lone gentile, gentle Shiksa (look it up, non-Jews) Melody, Molly Mayne is a delightful ray of sunshine even when she is attempting to assert herself.  Blond, blue-eyed and perky as a lemon meringue pie, she is lovely and cluelessly funny when she attempts to sing “Summertime” from “Porgy and Bess.”

Mike Kranick is wonderfully effective as the younger brother, Jonah. As he tries to stay out of the arguments swirling around him, he can coax more out of a facial expression than many actors can when reciting an entire monologue, making the audience wants to help him and the hapless Melody just escape the vitriolic and violent arguments going on between his brother, Liam, and his cousin, Daphna (or Diane – she goes by both names.)

Jon Meeker is outstanding as older brother Liam.  He can be as gentle and tender as any love-struck puppy with his soon to be fiancé Melody.  And he can scream hideous obscenities when pushed to the breaking point by his exasperating cousin.  Meeker’s scenes with little brother Jonah have an underlying believability that never seems false.  And boy, can he scream.  The spittle flies, the eyes bulge and yet his gentle humanity still is there.

And Ms. Anna Steurman is a freaking force of nature in her zealous portrayal of Daphna, the grandchild who feels such a visceral connection to her grandfather and the heirloom that she simply can not accept that it will be passed down to anyone but herself.  A fierce, focused, firecracker of an actress, Steurman can move you up, down and sideways with her passionate take on the character.  Beneath the strident performance we never lose sight of the glorious power she possesses, particularly in her few genuinely poignant reminisces of her grandfather.

You don’t have to be Jewish (though it certainly doesn’t hurt) to appreciate this production.  It is at its base a story about families, and history, and traditions, and religious beliefs, and each of our personal relationships with all those things.  And yet, it manages to be one of the funniest pieces I’ve seen in a long time.  So go, already.  Don’t miss this one.  “Bad Jews” is a very good time.

Advisory: Contains adult language, appropriate for ages 14 and up.