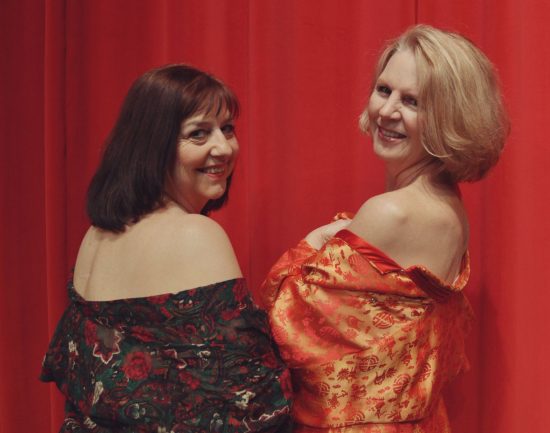 Zesty. Zany. Funny. Dry-witted. Life-affirming. These can all describe the production of “Calendar Girls” now playing at the Port Tobacco Players theatre in LaPlata, MD. This is also a brave production as the actors do disrobe (albeit not completely from the audience side). Those scenes elicited some of the loudest cheering and clapping from the audience, and it was, I believe, a homage to how beautifully in tune with their characters were that you momentarily forgot these were actors and were cheering on the Women’s Institute (WI) ladies in their charge to make a difference in people’s lives.

This is a joy of a show–and a fitting production in the little jewel box that is the Port Tobacco Theatre.

“Calendar Girls” is the story of how six women from a Yorkshire, England, WI came to produce a different kind of calendar for a cause—a simple cause at first. They just wanted to make enough money to replace a settee in the family waiting room at the local hospital and previous efforts at raising money through the WI were, shall we say, inadequate. One of their own, Annie (Joanne Fuesel), watched as her husband John (Rick Wathen) died of leukemia. She and her best friend, Chris (Lynne O’Meara), decide to raise money in his honor; their friendship is strained to the limit as their fame spreads and other issues come out. In the end, they had eleven of their WI compatriots willing to pose. This took courage as these are mature women with real women’s bodies but these women raised far more than money—they raised hope and community and perseverance.

This cast is near pitch-perfect. While the accents might have been a bit iffy, this group of actors brought the characters to life—with all their hopes and fears and frailties. You get to watch these women grow through this experience as they achieve much more than they had dared to hope for.

As Annie, Fuesel is the conscience of the show. She has two goals—to bring comfort to other families facing the horror of cancer and to honor her late husband. She plays the role with subtlety, a gesture, a sudden turning away as she recomposes her face, a slight sagging in her posture when she’s alone for a moment breaks your heart.

O’Meara is a robust Chris and her joy at getting a moment in the spotlight is highlighted with a very funny scene involving a misplaced funeral arrangement that she wields as a defiant and sassy gesture. Yet her loyalty in the end to Chris and John and their cause and willingness to rein in her need for a moment in the sun brings grace to the piece. When the WI national conference leadership tries to kill the project, it is Chris who takes the podium and dares them to defy the rightness of their quest.

Ruth, as portrayed by Erin Timmermann, is a revelation. Sad, straightlaced, easily shocked Ruth finds her inner warrior through her involvement in this project. Her husband is having an affair with a makeup artist from a spa/gym he has been frequenting; it is not the first time he has strayed. The scene where she finds the strength to confront the woman and send her packing is a study of a woman finding her strength and voice and setting her boundaries. It is an inadvertent #MeToo moment that Ruth would never take credit for, but her refusal to be a doormat any longer is absolutely shining.

All of the actors shine in their roles. Confined by WI and traditional women’s roles, they each have inner demons to confront. They would never see themselves as trailblazers, but together they find more strength then they realized they possessed.

One particularly funny moment is when Lawrence, hysterically played by Archie Parker, realizes that one of the women he is photographing is his teacher. His literal step back and the look of horror that crosses his face is epic. The moment is so natural and so quick that you feel really, really sorry for this young hospital porter and amateur photographer that has just had his world shaken. One can sense that he will never judge a woman by her cover again.

This is a joy of a show–and a fitting production in the little jewel box that is the Port Tobacco Theatre.

Running Time: Approximately two and a half hours with one 15-minute intermission.