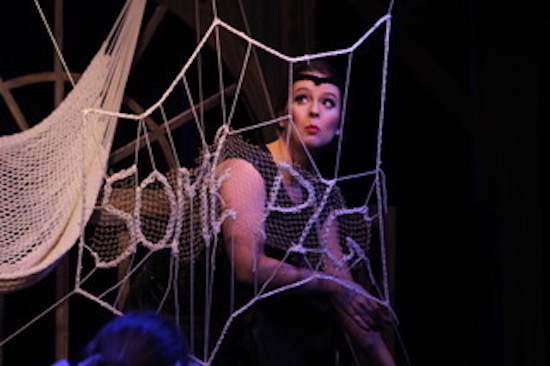 Entering the theater for Creative Cauldron’s “Charlotte’s Web” musical felt like stepping onto the Zuckerman family farm, the setting of E.B. White’s classic children’s story. The walls and floors were wood, the set simple — a few barrels, benches, and a trough for slop.

At the center of the room was the barnyard, where an ensemble of farm animals played, napped, and tumbled over each other. The Arable children, Fern and Avery, read stories and talked to the animals, a bit of magic given only to the children in this story.

Only a painted gate separated us from the characters, the physical closeness engaging us in the story. We watched the drama unfold as if neighbors leaning over the fence. Seeing Fern Arable dash out to the barn to save the runt pig Wilbur from slaughter, our sympathies are already with the pig.

In the end, ‘Charlotte’s Web’ is a story about self-giving friendship…

Sophia Manicone, a Fairfax Country 7th grader, played Fern, a young girl on the edge of growing up, with energy and unaffected optimism. Through Manicone, we understood Fern’s character, that she truly believes in the world’s goodness, a reflection of the author White himself. Her singing voice was strong and clear as a bell, notably in “Mama You Don’t Understand Me,” a response to her mother’s concern that she spends too much time with the farm animals. “I’m thirteen now, and this is how I’ll always be,” she sang.

Our first glimpse of Wilbur the pig (Will Stevenson) was as he ran squealing from Mr. John Arable’s ax and cowered behind the girl. Fern pleaded with her father about the unfairness of killing the pig because of his small size — a laughable irony, as Stevenson is a full-grown man, at least a foot taller than she. Stevenson, wearing a pink shorts suit and ears, was unexpectedly convincing as a pig. He hopped and wiggled and snorted, scrunched up his face when scared and fainted when overwhelmed, just as one might expect of an affectionate, anthropomorphic pig.

What can be said of Charlotte, the world’s most beloved spider? Abby Middleton, a graduate of the Eastman School of Music in Rochester, NY, portrayed the role with genuine warmth. She delivered feel-good platitudes to Wilbur and to the many children in the audience with such sincerity that even those of us coming in from our pre-holiday workweeks and city commutes began to believe her, too. In “You’re You,” she encouraged Wilbur not to compare himself to other, bigger pigs at the county fair. “There is just one you,” she sang with a sweet, well-trained voice.

In the end, “Charlotte’s Web” is a story about self-giving friendship, in the form of a spider who gives the last of her strength to weave the word HUMBLE in her web to save Wilbur’s life.

Director Matt Conner illustrated this best in the county fair scene. Charlotte’s writing in the web has catapulted Wilbur to local fame. The Zuckermans and the Arables, fairgoers, judges, reporters, and photographers swirled around the “extraordinary pig,” who glories in the attention.

In the back corner, looking pleased and tired, was Charlotte. She was unacknowledged by any of the characters, even Wilbur. I almost didn’t notice her myself, distracted by the flurry of motion and music and dance around the pig. But Charlotte observed the scene and smiled, content that, in her words to Wilbur, “My life made yours a trifle better.”