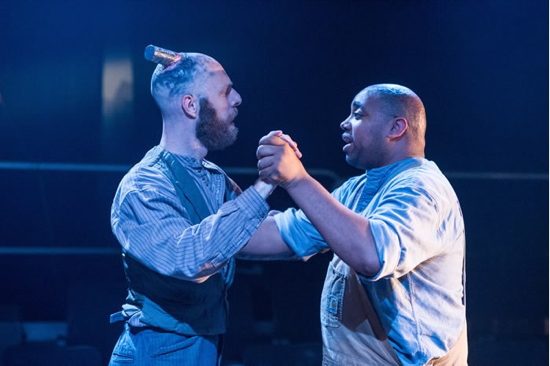 It is 1889 and Johnstown, Pennsylvania has just experienced a devastating flood. The survivors must face what to do and who to blame. A certain survivor, with a shocking injury, has been seeing strange visions. About a hundred years later, the steel mill is closing and the workers drink in a bar and also wrestle with what to do with their lives now. Gabrielle Reisman’s dark comedy, “Flood City,” now playing at Theater Alliance, struggles with tragedy, moving on, and responsibility.

Val lost her entire family in the flood and her gentle spirit is filled with anger towards the wealthy steel owners who live near the dam for not maintaining it. Lolita Marie plays this role with a kind passion and holy outrage.

Jenna Duncan’s direction and Jonathan David Martin’s movement direction brought this strong ensemble together in a thought-provoking piece of theatre that flows between time and space.

Kari Ginsburg plays Stacey, a young woman struggling to come to terms with loss and willing and doing anything she can as a distraction, from posing as a corpse for the New York Times photographer Mr. Stewart (played by Carlos Saldaña), to selling knick-knacks to disaster tourists, to acting as a prophet. Ginsburg’s portrayal is vibrant and energetic.

Clive, who sustained a miraculous injury, cares deeply for Val. He also keeps seeing visions of Johnstown making even more steel, bigger than he has ever seen and men working all day and all night. He believes he is seeing the future. Ryan Tumulty brings life to this compassionate man. Tumulty’s unending energy and emotional connection with the other characters on stage is the glue in this play, holding together time and space.

Jared Shamberger plays a young recently deputized National Guardsman who is eager to make a buck. He also plays a steelworker who is fearful of what he will do now that the mill is closing. He brings youthful joy and righteous anger to both of these roles.

A Red Cross doctor, Miss Duncan, is played by Kerri Rambow who also plays Carol, a no-nonsense bar owner. Rambow’s portrayal of these contrasting characters is stunning and relevant. She carries herself with grace and poise on the stage.

Saldaña’s Mr. Stewart is only in Johnstown to document the disaster and show the world the tragedy. He feels no emotional connection to what he is seeing. Saldaña also plays Dale, another steelworker concerned about his family as he is thrust out of work. He is a strong actor who makes clear choices on stage and his characters are distinct.

A city planner made his way into Johnstown to aid in the rebuilding but refused to clean up. This character was played by Matty Griffiths who also played a man laid off by the steel mill that seemed resigned to his fate.

The theater was laid out in an alley format, with the audience on two sides facing each other, with three main playing spaces in the center where the action happened. The set, designed by Andrew Cohen, easily converted between time period and location. With debris hanging from the ceiling, it was almost as if the audience was caught in the flood as well.

Kelsey Hunt designed the costumes that reflected what workers in 1889 and the early 1990s wore. They were multilayers and included a nice combination of texture and pattern. Emma Tremmel had the particularly special task as the prosthetic designer to create a realistic head wound that truly caused a gasp when Tumulty first entered the stage.

Jenna Duncan’s direction and Jonathan David Martin’s movement direction brought this strong ensemble together in a thought-provoking piece of theatre that flows between time and space. They made these shifts clear and effortless.