Theatre Review: ‘Hamlet’ at The John F. Kennedy Center for the Performing Arts 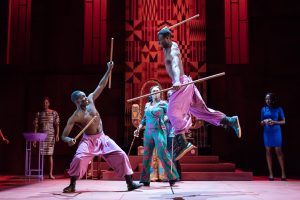 For a very limited run this week, Denmark by way of West Africa by way of Britain is in residence at The Kennedy Center.

The Royal Shakespeare Company has created a sub-Saharan “Hamlet” that is crackling with energy. From the body-shaking drums that open the production to the capoeira-inspired final scene, director Simon Godwin makes the world’s best-known play fresh and suspenseful, even though we all know the tale.

This is a “Hamlet” worth seeing, whether it’s your first time or your hundredth.

Paapa Essiedu is a very human Hamlet, bringing a sense of irony to the role. He carries a quality of understatement throughout his performance even in Hamlet’s maddest moments, embodying a Prince of Denmark who is uncertain and fatalistic, and who covers up his insecurities with a detached humor.

In fact, humor is one of the greatest strengths of this impressive production. “Hamlet” is not usually thought of as a play with much to laugh at, but Godwin emphasizes the play’s comedic moments, which humanizes all of the characters. As Claudius, Clarence Smith brings a vulnerability to a character usually portrayed as aloof; Mimi Ndiweni’s Ophelia breaks through some of the confines of her character with her banter with brother Laertes.

Polonius is the only major character regularly portrayed with some humor, and Joseph Mydell delivers it just fine, but his Polonius stands out for the dignity he brings to it. Mydell’s Polonius is not just a stuffed shirt and a windbag; he is also an accomplished and rightly proud man.

Eleanor Wyld draws the eye as a sparkly, smirking Guildenstern, palling around with her college buddies; Tracy-Anne Green delivers a resonant musical solo as the Gravedigger’s Assistant.

Godwin and his artistic team make full use of their theatre space, with several entrances from the back of the house and down the aisles. The colorful, boisterous parade that brings the Players to Elsinore is mirrored later by Ophelia’s somber funeral procession.

This contrast between the vibrant and the bleak runs throughout the production. In his madness, Hamlet adopts the style of Jean-Michel Basquiat, producing a series of graffiti-inspired paintings marked with a crown. He is spattered in pastel paints as he delivers his most famous soliloquy, contrasting color with thoughts of the abyss.

The modern elements of the production are delivered with a light touch, avoiding some of the heavy-handedness that sometimes accompanies anachronistic Shakespeare productions. This is a “Hamlet” worth seeing, whether it’s your first time or your hundredth.

“Hamlet” runs through May 6, 2018, at the Eisenhower Theater at the John F. Kennedy Center for the Performing Arts in Washington. Click here for tickets.