Theatre Review: ‘How I Learned To Drive’ by Dominion Stage at Gunston Theatre Two 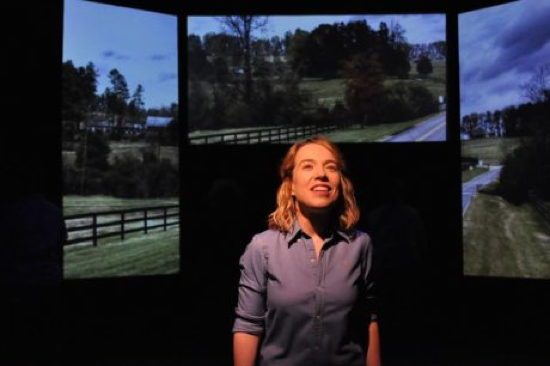 Brianna Goode in ‘How I Learned to Drive.’ Photo by Matthew Randall.

This is one of the most incisive, insightful works about incest, victimization, alcoholism, misogyny, victim-blaming—so many things—I have ever seen on a stage. Written by Paula Vogel, it was awarded the 1998 Pulitzer Prize for Drama. Dominion Stage, under the direction of Sharon Veselic met the challenge fiercely. The performers give raw, honest, uncompromising performances, which is what such a work demands. Without stating anything so obvious, the writing drives home the point that the person sitting next to you at a concert or waiting in line at the grocery store could be a victim/survivor or a predator. Until someone speaks out, no one can truly know. And boy, do Lil Bit, and her family, finally speak.

Cassidy makes the monster human and that is truly frightening.

Briefly, the work concerns a family that has secrets. The 11-year-old daughter (Lil Bit) of one of two sisters is victimized by her uncle, married to her mother’s sister. But as the evening unfolds more and more secrets come out; including that her grandfather married her grandmother when she was only 14. Set in the early to mid-1960s, the story follows the girl from when she was 11 to when she left for a “fancy college” when she was 17. It ends when she is 35 and has come to some kind of terms with the abuse and the complicated relationship with her uncle and her family.

The story is set in vignettes interspersed with Lil Bit’s, and at other points, her mother, aunt and grandmother, addressing the audience directly. They are almost musing to themselves, trying to make sense of how they came to be where they are, and at the same time, trying to hide from the truth. The adults are all culpable yet they too have been victimized and have turned to unhealthy ways of coping. Their lives are about simply surviving.

The play is structured around driving lessons and driving with her uncle. The one positive thing her uncle gave Lil Bit is knowledge of cars and safe, defensive driving. Whenever things start to get too confusing between them, she can fall back on his protectiveness and insistence that she learn to drive well. It’s the one safe haven she knows.

As Lil Bit, Brianna Goode is vulnerable, childlike, and yet knowing and wary about men. She doesn’t fully trust her family, yet they’re all she has. Like most female victims she internalizes the abuse; in this she is abetted by her family: at the age of 11, her mother tells her that she doesn’t like the way her uncle looks at her, but if she goes on a seven-hour drive with him and “anything happens, I’ll hold you responsible.” She is Eve, damned from the get-go for being female. Goode’s performance is so pitch-perfect that you yearn to snatch her way and save her from this cruel knowledge and from the wasted years of alcohol abuse.

Keith Cassidy plays Uncle Peck and he gives a complex portrayal of a man who has become a monster, yet at the same time is battling his demons. He is a war veteran who never speaks of it, yet when the darkness comes, tries to fight it off silently with his wife sitting beside him. He is a serial abuser who gives up alcohol for several years to try to control his urges, yet continues to groom Lil Bit. Cassidy makes the monster human and that is truly frightening.

Paul Donahoe is the Male Greek Chorus, playing Lil Bit’s cousin BB and her grandfather, Big Papa. In the former role, he is somehow unfinished and emotionally stuck in the time he was victimized; in the latter role, he is cruel and misogynistic and possibly a predator. His pronouncements on why he, a grown man, chose a 14-year-old girl as his bride and continues to dominate this little family are horrifying. Donahoe gives a solid performance in both roles.

Gayle Nichols-Grimes is the Female Greek Chorus, playing both Lil Bit’s mother and her Aunt Mary (Uncle Peck’s wife). She skillfully unfolds the characters until you feel an uncomfortable blend of irritation with the way they’ve chosen to cope and with their victim blaming, and pity for what they’ve lost along the way. As Lil Bit’s mother, she gives her advice on how to drink like a lady, which is laughable as she is about as far from a “lady” as one can imagine, yet there is a maternal desire to arm her daughter that shows through. Nichols-Grimes is heartbreakingly nuanced in both roles.

Bryna Parlow is the Teenage Chorus. She portrays all the mean girls in junior high and high school who bullied and mocked Lil Bit because she matures physically at an early age. Parlow also portrays Lil Bit’s grandmother. She gives a devastating performance of a woman who had little education and who is completely cowed and controlled by a man who only sees woman as for sex and cooking, yet at the same time she dimly knows something is not right.

This is a daring play for a community theatre group to take on. The subject is hard to stomach, much less watch, and the performances seduce you and leave you feeling helpless and a little soiled. Dominion Stage meets these challenge head-on and brings it all the way home. This is a play worth seeing with a cast that seems born for these roles.

Running Time: Approximately one hour 45 minutes without an intermission.

Advisory: This show is for mature audiences (rated R) for sexual situations and mature content. After select shows, there will be talk-backs led by professionals with experience in incest and sexual victimization.

“How I Learned To Drive” runs from May 4-19, 2018 at Gunston Theatre Two, Arlington, VA. For more information, please click here.