Theatre Review: ‘Into The Woods’ at Memorial Players 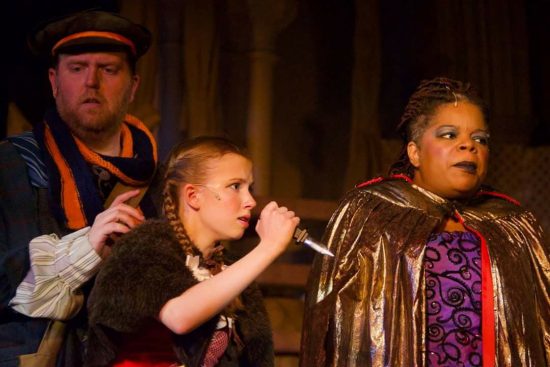 Ryan Geiger as Baker, Ruby Webb as Little Red Ridinghood, and Kay-Megan Washington as The Witch. Photo by David Hornbeck.

Since 2002, as part of its education and outreach ministry, Memorial Church and Memorial Players have offered free, high-quality theatre to the neighborhood of Bolton Hill and the surrounding communities. It has given opportunities to those who might not otherwise have access to watch live theatrical performances or to participate on stage or behind-the-scenes.

The Memorial Players recent production of “Into the Woods” once again proved how theatre connects people from within the community in order to create and enjoy the magic of the performing arts.

Director Stephen Deininger said, “We have paired experienced actors and staff with inexperienced actors, actors who are playing the biggest role they’ve ever played, and even children. I think there is beauty in that.”

The Memorial Players…once again proved how theatre connects people from within the community in order to create and enjoy the magic of the performing arts.

In a book by James Lapine with music and lyrics by Stephen Sondheim, “Into the Woods” takes a darker, twisted, and even sinister look into a blend of Grimm’s fairy tales.

Familiar characters include Cinderella (Played with heart by Nampoina Randrianarivelo), her Stepmother (an evil Megan Dimmock) and wicked stepsisters, Florinda and Lucinda (a wild and wacky Talia Katz and Sallie Ratrie), Red Ridinghood (Played with gusto by Ruby Webb) and the Wolf (In a hair-raising performance by Jamie Griffith), Rapunzel (a kind and loving Brinley Fisher), the Witch (In an outstanding performance by Kay-Megan Washington), and Jack (and the beanstalk) (Played with great stage presence by Tyler White) and his mother (a naturally maternal and caring Elizabeth Kanner). Paul Ballard as the Mysterious Old Man adds a quiet, yet effective and thought-provoking touch whenever he is on stage.

The story also includes a Baker and his wife who wish to have a child, but cannot because of a Witch’s curse. It is very important to the story that the Baker be likable.  Ryan Geiger as the Baker excels with his natural acting skills and strong singing voice.  He and his equally talented wife, played by Ginny Hornbeck, take the audience on the journey with them to find “One: the cow as white as milk, Two: the cape as red as blood, Three: the hair as yellow as corn, Four: the slipper as pure as gold.”  All this will break the curse placed on them by the Witch.

To help keep the story moving forward and to help explain the action on stage, Paris Weeks serves confidently as the Narrator. The director made a wonderful choice by adding a group of enthusiastic children to sit along the side of the stage to watch the story and sometimes sing, dance, and even move around some props.

Rapunzel’s Prince (a debonair Jacob Hale) and Cinderella’s Prince (Played with charm and a dark side by Daniel Plante) made me laugh during the song “Agony” where they are seemingly in competition with one other in the battle over the question which Princess is harder to catch for a wife.

There are many wonderful songs in the production. I asked director, Stephen Deininger about his favorite song in the show. He said, “Right now, it is “No One is Alone.” I always thought that song was too slow or too quiet, but what the actors brought to the stage was a willingness to connect with each other. I love that it starts with Little Red stopping in the middle of all her thoughts of violence and vengeance, taking stock of who she has become and how she was raised, and having this total James Joyce epiphany moment and coming to the conclusion that if the people who raised her saw her now, they wouldn’t approve of her choices.”

This production would not have been possible if it weren’t for the truly outstanding live orchestra conducted by the incomparable Tim Viets, the clear and concise vocal direction by Gregory Satorie-Robinson, and bouncy choreography by Lauren Lowell.

What is more, the set design and creation by John Seeley created a fitting mood with trees with no leaves and platforms with different levels to great effect.

Running Time:Approximately 2 hours and 45 minutes with one intermission.

“Into the Woods”played through April 29, 2018 at Memorial Players in the Memorial Episcopal Church— 1407 Bolton Street in the Bolton Hill neighborhood of Baltimore, MD. For information about future productions, click here.