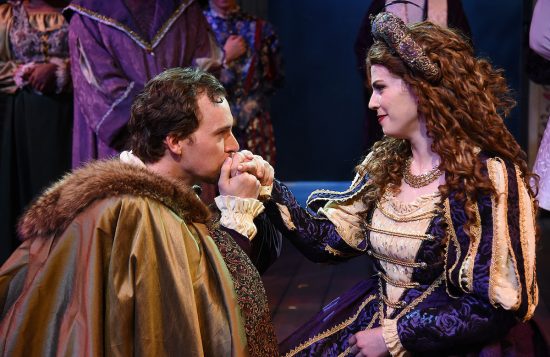 Annapolis Shakespeare Company is one of the jewels of the Anne Arundel County theatre scene. Their productions are full of talented artists and are beautifully designed from set to the costumes. Their latest production, “Kiss Me Kate” – ASC’s first musical – follows suit. Even if the show itself isn’t exactly as timely as it was 70 years ago when it first premiered, ASC still managed to put on a fun and campy rendition of the classic.

…“Kiss Me Kate” fabulously showcases just how talented the actors and creatives of the Annapolis Shakespeare Company are.

“Kiss Me Kate” is based on one of Shakespeare’s most troublesome plays for readers of today – “The Taming of the Shrew.” The play tells the story of Katherine a “shrew” of a woman – who today would be lauded as strong and resourceful, and Petruchio, the man who sets out to “tame” and later marry her. “Kiss Me Kate” on the other hand, involves an acting troupe attempting to put on a production of “Taming of the Shrew.” As it is a musical comedy, mishaps and misunderstandings ensue, all sung to the 40s beats of the incomparable Cole Porter.

As first musical productions go, ASC’s “Kiss Me Kate” fabulously showcases just how talented the actors and creatives of the Annapolis Shakespeare Company are. Director and Choreographer Sally Boyett has a knack for directing this type of classic musical. By assembling a top-notch cast – some of which have experience with musicals – she manages to create a fun and fast-moving show the entire family can enjoy. This cast is led by Robin Weiner (Lilli/Katherine) and Benjamin Russell (Fred/Petruchio) in starring roles. Particularly funny is Ms. Weiner.  Her solo “I Hate Men” is a highlight of the evening. Watching her fully commit to the frustration she feels with Fred and every other male, she nails every sigh, facial expression and holler. She is a very talented comedienne and is made for this type of musical comedy.

While this is apparently Mr. Russell’s first musical, this isn’t his first time appearing with the company. He sang a bit in “Much Ado About Nothing,” and it appears Shakespeare plus music should be considered his specialty. His chemistry with Ms. Weiner is something special. If their love affair wasn’t quite so dated (thanks to being written in the 1940s), this particular couple would make the perfect comedic duo. The pair is accompanied by a fantastic ensemble. The show seems to really take off when the ensemble has the chance to dance as one in numbers such as “It’s Too Darn Hot” or “Another Op’ning, Another Show.”

Ms. Boyett’s choreography is quite ambitious for a first musical, and yet the team of actors perform the numbers flawlessly. The dance numbers are not only fun but also mirror some of the moves in classic musical comedies and movie musicals from the time period in which the show was written. Add this to the beautifully authentic costumes designed by Sandra Spence and you have a fully fleshed-out modern production that feels like a classic.

It must be said, however, that the show (not the production) itself is a bit dated. In other words, heading into the theatre, if you can remember that what you’re about to see was written in the 1940s, a far cry from the #MeToo movement of today, you’ll enjoy it a bit more. It’s only when you focus on the bigger picture – a woman being forced to change just to impress a man – that it begins to lose a little of the sparkle.

While many of the musicals of that time are also concerning, this particular show seems a bit more in your face with its disregard for women. Though, it should also be said that this production can be seen as a showcase for just how far the women’s movement has come in the last 70 years. If Kate’s portrayal frustrates us, we should use the show as a guide to assure women aren’t portrayed in the same manner in new works. If we can accomplish that, then the production has succeeded in moving us in the right direction.

The ASC has worked hard to create a production that’s fun for the whole family. And I believe they have. While it’s still up in the air whether the show should be appreciated today, this particular production has real value and merit. And while this company is known for straight plays, this production has proven that they can do so much more, which will hopefully propel them into doing more musicals in the future.