Theatre Review: ‘Love, Loss, and What I Wore’ at Spotlighters Theatre 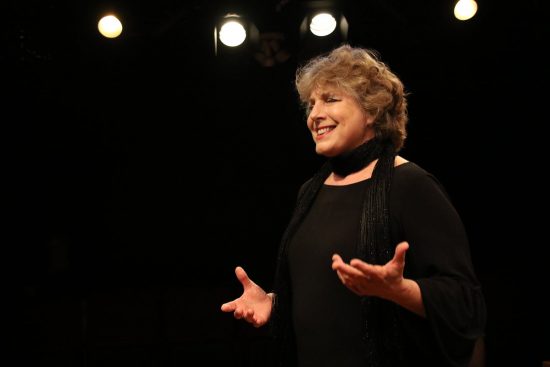 “Love, Loss, and What I Wore” is the Audrey Herman’s Spotlighters Theatre’s latest offering and if the audience response over the weekend is any indication, they have yet another hit on their more than capable hands.

Nora Ephron and her sister, Delia, penned the piece based on the book of the same name by Ilene Beckerman.  After a couple of early outings, it was mounted Off-Broadway in 2009 with a star-studded cast that included Linda Lavin, Karyn Quackenbush, Leslie Kritzer, Kathy Najimy, and Sara Chase. Subsequent productions included more big Broadway names.  I’ll tell you – the cast at Spotlighters can give them all a run for their money.

It is a journey of small and large self-discoveries told with humor and raw truth.

There is no plot to “Love, Loss, and What I Wore.” Rather, it is series of 28 vignettes presented by a cast of women who, individually and in groups, relate their experiences and emotions with respect to various items of clothing, and what they were living through at the time a particular item was part of their wardrobe.  They also dig deep into their relationships with the men in their lives, the world at large and, most revealingly, themselves.  It is a journey of small and large self-discoveries told with humor and raw truth.

Director Erin Riley is an unapologetic (as well she should be) passionate believer in strong female perspectives (her words), and her guidance on this show is visible in the quick pacing, the clever staging on the four-sided stage at Spotlighters and the breadth of the characterizations she brings to life through the 10 women who deliver the goods in every vignette, some more nuanced, some more strident, but all wonderfully realized.

Laurie Brandon does a nice job lighting Alan Zemla’s well-designed set. In each corner of the theatre there are small, appropriate little scenes built to display either a closet, the names of fashion magazines, or what I think was meant to be a dressing room. Julia Golbey dresses the cast in variations in black, accented with a scarf here, a change of shoes there, and it all hangs together to mesh perfectly with the minimalist set design.  Riley uses water color type sketches to illustrate various points during several of the vignettes, a device that adds nicely to the monologues.

There is only one recurring character actually named in the play. That would be the indefatigable Gingy, marvelously played by Mickey Mullany.  She is an apt and engaging actress who seems as at home on the stage as most would be talking to friends in their living rooms.  The rest of the large cast offers an even larger number of characters relating stories of their own.  I particularly enjoyed Lanoree Blake’s scene, Boots, and everything Shamire Cassell did.  But the strongest parts of the show were the ensemble pieces.  Hillary Mazer, Lyn Belzer, Lexi Martinez, Cynthia Miller, Melanie Bishop, Lizzie Travis, and Michelle Gonzalez round out the cast.  They are all superb, and director Riley seems to have known exactly who would be best suited for each vignette.

28 vignettes with stops and starts in the hands of a less able director would have made for a long and tedious production.  This one is anything but.  And guys, it may be about women but there are some universal truths. We’ve all loved, we’ve all lost and most of the time, we wore something while we were doing it.  There are revelations on display here that everyone can relate to.

Running Time:  approximate 2 hours and 15 minutes with one intermission.