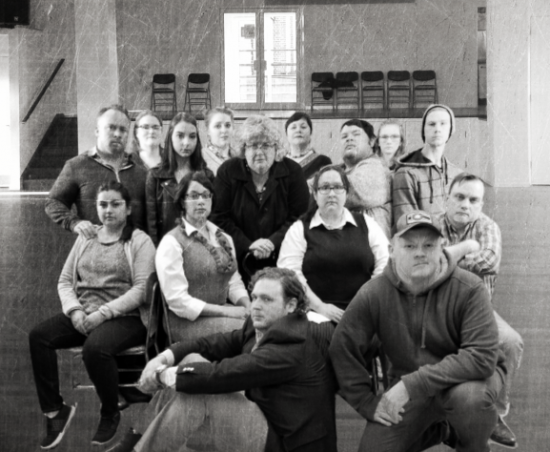 The cast of “New York” at Just Off Broadway. Photo by Jason Crawford Samios-Uy.

In a lot of ways, the attacks on September 11, 2001 was this generation’s Pearl Harbor. 9/11 is equated with many of the same thoughts and feelings as December 7, 1941. Each person alive on that day has a story of where they were and can remember for the most part exactly what happened. Whether people were affected directly or indirectly, it’s easy to forget that everyone deals with tragedy differently. These varied responses are what Just Off Broadway’s fantastic production of David Rimmer’s “New York,” directed by Stacey Shade-Ware, addresses. How exactly does an entire generation respond to one life-changing day?

They should be applauded for not only creating a compelling piece of theatre, but also spreading this message of healing and hope to a wider audience.

Using only a few chairs as set pieces, this pared-down production has the effect of a group therapy session – for the characters and the audience alike. Playing the therapist and leader of the group session, Stephanie Shade is the perfect sounding board for the group members. She shows quiet attention to the stories being told and patience in response to a few difficult members. She listens intently as characters tell stories of what affects them most about that fateful day.

What is so affecting about the accounts is that I’m almost positive that I’ve heard them before. In the days following the attacks, stories such as these were everywhere. Paramedics who spent their days saving lives while trying to keep it together. Restaurant workers who should have been in the towers that morning but for one reason or another didn’t make it in on time. Office workers who made it out while their coworkers did not. Everyone in New York, for the most part, had stories to tell.

Because of this, Rimmer’s play feels universal. Yes, the particular therapy group were for those having issues dealing with what they witnessed on 9/11, but the stories encompass feelings and emotions that are the same for everyone. Through these stories, others who have gone through the same or similar situations begin to heal and realize that they may not be totally alone in their pain and grief. It’s a remarkable feat of storytelling by the playwright, and by this marvelous cast alike.

This universality makes it hard to point out one particular actor or story. The entire cast is pitch-perfect in their storytelling. Each member of the cast takes their story to heart and makes it their own. In roughly 10 minutes of stage time, the actors have created fully fleshed out characters. You understand why they’re reacting the way they are and what has brought them to this point. What is even more remarkable is that the cast manages to do this without the aid of any props. Only costumes are used to convey quickly what the characters’ backgrounds are. From there, it’s completely up to the actors to tell a compelling tale.

A piece like this can only be created together by a talented ensemble. And this company seemed to find just the right ensemble for this important piece. No one is vying for attention or arguing for a share of the spotlight. They are using their time to shine a light on the real people – survivors, first responders, family members and friends – upon which these characters are based and succeeding in doing so beautifully. They should be applauded for not only creating a compelling piece of theatre, but also spreading this message of healing and hope to a wider audience. And they should also be proud of the show they’ve created.

“New York” plays through May 20, 2018, at the Jerusalem Evangelical Church, 4605 Bel Air Road in Baltimore, MD. Tickets are available for purchase at the door or in advance online.