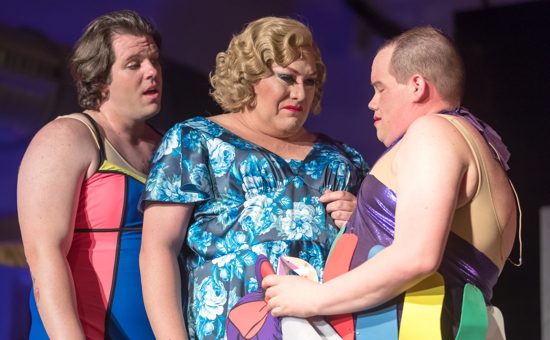 “Priscilla, Queen of the Desert” is a delightful musical based on an Australian movie of the same name, which was remade as the American film “To Wong Foo, Thanks for Everything, Julie Newmar.” The story follows three drag queens as they cross the Australian outback in bus “Priscilla” en route to what two of them believe is no more than a great job opportunity to headline at an Alice Springs casino. However, the casino is owned by queen Tick’s estranged wife Marion, who has invited Tick to come meet their son Benji for the first time. I saw the show performed on opening night, May 11, 2018, by Kensington Arts Theatre at Kensington Town Center; directed by John Nunemaker with musical direction by Valerie A. Higgs.

…I recommend “Priscilla, Queen of the Desert” as a fun-filled performance with strong performers and a nostalgic soundtrack.

The show features a wonderful soundtrack of classic pop tunes, including such favorites as “It’s Raining Men,” “Venus,” “Say A Little Prayer,” “What’s Love Got to Do With It,” and, of course, “I Will Survive.” I greatly enjoyed every number! Featured on most songs were a trio of Diva singers led by the powerful lead singer Temple Fortson and ably assisted on harmonies by Kristin Franco and Summer Hill. (Franco is also a MD Theatre Guide writer.)

The cast was led by Gregory Wilczynski as Tick, Larry Munsey as Bernadette, and Jon Simmons as Adam. All three co-leads were phenomenal – from the sweet emotiveness of Wilczynski to Simmons’ saucy campiness and sexy dance moves to Munsey’s emotionally rich and professionally polished drag performance.

Another standout performer was ensemble performer Brian Dauglish who was an excellent dancer and singer featured in several roles throughout the night, from an Aboriginal tour guide to the lead singer on “Thank God I’m A Country Boy.” I also enjoyed Jack Mayo’s performance as Bob, the Aussie war veteran who had fond memories of Bernadette in Les Girls. Joy Cecilly Gerst as Shirley was a hilarious delight and got many laughs.

The set designed by Scenic Designer Bill Brown featured the bus, Priscilla, prominently, who was fabulously decorated with a sparkly high heel on top. I enjoyed how the cast made use of many different levels on the stage – it was especially fun to see the divas perform on the upper levels close to the ceiling and Adam lip sync opera on the high heel atop of Priscilla.

I think it could have been more effective to have Adam be wearing a stuffed bra when he delivers the line about his (fake) bosoms as it didn’t play as well when he gestures to his flat chest. One other detail I would have appreciated in future musicals is to list in the program which cast member is featured as a soloist on each song as it was sometimes an ensemble member whose name I didn’t know.

“Priscilla, Queen of the Desert” by Kensington Arts Theater is playing through May 26, 2018, at Kensington Town Center. For ticket information, click here.