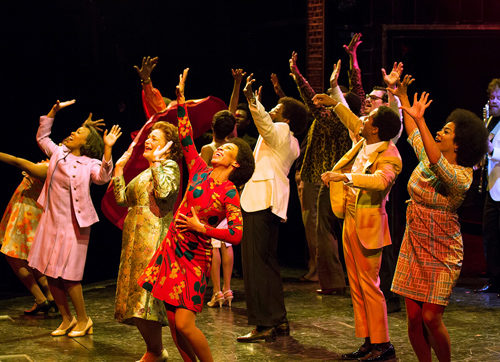 In the tradition of recent jukebox musicals (“Jersey Boys,” “Motown: the Musical” and “Beautiful: The Carol King Musical”), “SOUL: The Stax Musical” – the high energy, get-up-off-your feet production – is making its world premiere at Baltimore Center Stage. This is former artistic director Kwame Kwei-Armah’s joyous love letter to a theater he helmed through expansion, renovation and rebranding over the past seven years. The deep catalogue of the Stax label and its artists come to life on stage and simply bring the house down!

I vividly remember watching the documentary “Respect Yourself: The Stax Records Story” on PBS in 2007. It was a fascinating presentation of the label and its impact on the music and social fabric of this country. The book by Matthew Benjamin chronicles the bumpy and glorious history of a Memphis record label started in 1957 by an unlikely couple – a white bank employee, Jim Stewart (Robert Lenzi), and his sister, Estelle Axton (Mary Jo Mecca). With little more than a passion for the music and determination, Stax Records discovered and nurtured some of the biggest names in southern soul music during one of the most turbulent times in American history. From the 60s to early 70s – the era of the Civil Rights and the rise of black pride – Stax was the grittier reflection of the changing times, second only to the slicker, pop powerhouse of Motown.

The integrated house band comprised of two white and two black members – Booker T. and the MGs – was also revolutionary, especially in the Jim Crow south. Keyboardist Booker T. Jones (a sincere David LaMar), guitarist Steve Cropper (Sky Scott, a “JerseyBoys” alum who has an incredible guitar solo), bassist Donald “Duck” Dunn (a delightful Scott Stangland), and drummer Al Jackson (Kyle Bary) became the backbone of the “Stax” or “Memphis Sound.” The group also had their own instrumental hits – the most familiar being “Green Onions.” Cropper was also a songwriter and producer for other acts on the label.

For Stewart, it was all about the music but, ironically, he lacked business acumen. In desperate need of an advance, Stewart didn’t have a lawyer, nor did he read the fine print, when he signed the distribution deal with Atlantic Records’ executive Jerry Wexler (a perfect Kevin Carolan). Stewart discovered too late and that mistake would cost him and the company.

Another hit to the company and the music world was the untimely death (in a plane accident) of one of their biggest discoveries – Otis Redding. Ricky Fante embodies the singer in four of Redding’s songs  – “These Arms of Mine,” “Sitting on the Dock of the Bay,” “Respect,” and “Try a Little Tenderness.”

A charismatic, black DJ, Al Bell, supported and eventually became Stewart’s partner, working the promotion side. For Bell, it was about the social change as well as the music. The play shows an underlying tension between the two men and their differing perspectives on how to run the business. Bell spent money like water with grand but successful ideas like touring Europe with the Stax stars but he also hired some shady characters and made other changes that eroded the family-feel of the company. Stewart and Axton’s right hand, Deanie Parker (the wonderful Anastacia McCleskey) never quite trusted Bell.

After Stax lost the rights to the master tapes, Bell came up with an ambitious plan to produce and release 27 albums in eight months, which brought in the funky, soul era of the 70s with stars like Mavis Staples (Tasha Taylor) and the Staples Singers (“I’ll Take You There”), Jean Knight (Allison Semmes) and the big man himself, Isaac Hayes (Boise Holmes).

Stewart’s sister, Estelle, was eventually pushed out when Bell closed the Satellite Record Shop adjacent to the studio that helped support the business. It was her great love. Mary Jo Mecca get her chance in the spotlight with “Your Good Thing (Is About to End)” with a voice equal to any of the singers in the production.

There is a lot of history to pack into two hours plus  – especially when it is filled with over 30 incredible hits from the Stax collection. With the roller coaster ride of the ups and downs of the Stax label, Stewart gets a bit of short shrift on character development. He always seems in a panic or afraid to tell his sister his next business decision instead of being shown as the groundbreaking producer he was. Though you may only get a sense of the stars through their songs, the actors are so overflowing with talent (some doing double duty) that magic happens –  you feel as if you are at a concert watching the real thing.

One of Stewart’s first successes was signing father and daughter, Rufus and Carla Thomas. Harrison White as Rufus practically steals the show with his bigger than life personality. Rufus is known for his novelty songs with animal references – from “Walking the Dog” in the 60s to “Do the Funky Chicken” in the 70s. His daughter, Carla (the sparkling Allison Semmes who played Diana Ross in Motown the Musical), has her own hit, “Gee Whiz.”

Jon Harrison Taylor gets the opportunity to play his father Johnnie Taylor (“Whose Making Love”) as well as the difficult Wilson Picket (“In the Midnight Hour.”) Boise Holmes is towering physically and vocally as he channels Isaac Hayes in the “Theme from Shaft” and a soul spin on Bacharach/David’s “Walk on By.”

Production-wise, you can’t help but notice some nods from the best of the jukebox musicals – “Jersey Boys.” The audience is both observer and participant. While the superb orchestra is visible behind the scrim backstage, Sky and Scott play their instruments on stage. A performance on a TV show is filmed live and projected onto the set.

But Kwame Kwei-Armah uses the entire theater to envelope the audience into its loving embrace. With the clever use of projections and actual footage, scenic designer David Gallo and co-projection designer Alex Basco Koch create the time and the mood. Lively choreography by Chase Brock and spot on costumes by Dede Aylie capture the period beautifully. Even if you didn’t live it, “SOUL: The Stax Musical” is such a joy (which begins in the lobby!) and if you did, it is an incredible treat. I am sure it has Broadway in its sights!

Advisory: This musical celebration set in the early years of the Civil Rights Movement contains some adult language and may be most suitable for middle school audiences and up.