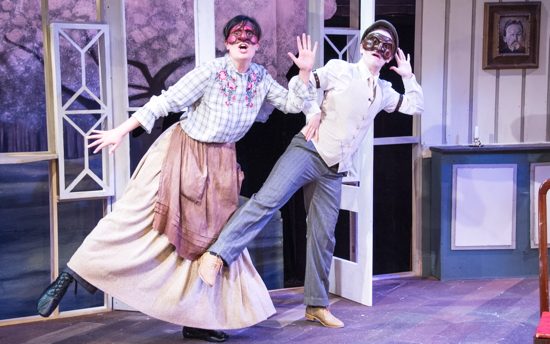 Once upon a time Anton Chekhov, the Russian playwright, had a huge problem: his director, Konstantin Stanislavsky (not his real name, by the way) kept on treating his comedies as if they were tragedies. OK, so life sucks and the characters never get what they want; plus instead of compelling love triangles, you get these bizarre love merry-go-rounds where everybody pines for somebody else.

I mean, what’s to cry about?

The solution: create a bumbler whose syntax is as clumsy as his movements onstage: Simeon Panteleevich, “Simeon, son of Pantalone” – literally, the son of a comic servant from the Italian Commedia dell’ Arte. And so, amid the chaos and pathos of his last play, “The Cherry Orchard,” where we witness the decline and fall of an upper-class estate, Chekhov guarantees we’ll get the giggles every time this sad sack—also known as Epikhodov – squeaks his way onto the boards.

Ever on the lookout for rich comic material, the enterprising folk at Faction of Fools, Washington’s resident Commedia company, has created a Tragicomic—or, should I say, Comedo-tragic – production of “The Cherry Orchard” that would have Stanislavsky tearing out what remains of his hair and make Chekhov break out in a mischievous grin. It’s also a perfect introduction to Chekhov’s comic genius, especially for audiences who’ve been brainwashed into thinking he’s all doom and gloom from the tomb. (He does great one-act comedies, too, just sayin’).

Far closer to the original intent than just about any production you’re likely to see, Director Paul Reisman has assembled a cast that goes from high drama to low and back again faster than a Tesla. (Which is named after a guy who’s Serbian, not Russian, but I digress…) This might be jarring for the fancy theatre folks across town who seem to think Chekhov is a pensive, brooding type; but it’s a reminder that theatre knows no boundaries.

Leading the ensemble is the stunning Sara Barker as Lubov, whose estate (and titular orchard) are about to be auctioned off to God-knows-who because she and her feckless brother Gaev (the gently foolish Jesse Terrill) have frittered away their fortune on booze, billiards and decadent jaunts to Paris. Angling for the orchard—and, perhaps, Lubov?—is the local entrepreneur Ermolai Lopakhin, the son of a serf who, once upon a time, actually belonged to Lubov’s family. Rich, cocky, and decked in plaid, Lopakhin – played with passion and thumb-in-vest-pocket verve by Kathryn Zoerb – is constantly on Lubov’s neck about turning the estate into a vacation resort (dacha being Russian for “timeshare” apparently).

Reisman sticks to Chekhov’s original tale with by turns hilarious and compelling results. There’s plenty of room for wonderful character work—and this being Commedia, the servants get all the best schtick. Jack Novak doubles as Firs, the oldest servant on the estate, and Yasha—the youngest and sexiest—and his physical transformation from one to the other is so complete that if it weren’t for the program you’d have no idea you were seeing the same actor succeeding brilliantly in two comedic roles. Francesca Chilcote shines as Dunyasha, the servant girl completely smitten with Yasha and her attempts to, um, woo him are spot-on. Danny Cackley doubles up as the clumsy servant Epihodov and the student/schoolmaster Trofimov, revealing the two sides of intellectual excess (the wannabe and the clueless) to hilarious effect. Meanwhile, Julia Klavans anchors the household chaos as Varya, the estate manager who keeps waiting for Lopakhin to pop the question. Klavans’ amusing deadpan is reminiscent of the women who had to retain some semblance of sanity while the Marx Brothers ran rings about ‘em.

This being a Gallaudet-based production we also get a glimpse of talented acting with ASL; Casey Johnson-Pasqua shines as both the governess Charlotta and a mysterious tramp, a reminder that Commedia often communicates best with gesture and nuance, not just the spoken word.

Kitt Crescenzo has decked out the cast in a fine range of duds, from Firs’ pathetically lumpy and distressed tails to Lubov’s shimmering gowns, and Ethan Sinnott’s set is hinged nicely to transition from the inside to the outside of the house. Jesse Terrill borrows nicely from the classical music of the fin de siècle for his incidental music, and Megan Godfrey has assembled a wide variety of eclectic props to help feed the comic to-ing and fro-ing (Suitcase Tag, anyone?).

There are only two more weekends to catch this zany take on Russia by way of Italy, and the Gallaudet campus is an easy drive down Florida Avenue (from New York Ave. or H St. NE, take your pick). The neighborhood is changing in a big way, and you’ll be happy to see it if you haven’t been there in a while. Long past time to check it out, I’d say!

“The Cherry Orchard” runs through June 10 at the Eastman Studio Theatre on the campus of Gallaudet College – enter at the stoplight at 8th St. and Florida Avenue, N.E. For tickets and directions. click here.