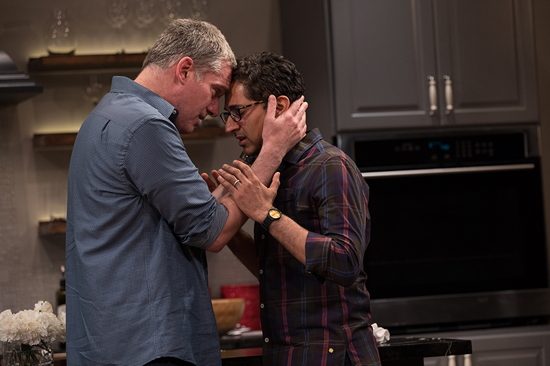 “The Remains,” now playing at the Studio Theatre, is a “Where are they now?” story of sorts about one of the first gay couples to be legally married in Massachusetts. Directed by David Muse, the play is set 10 years after that historic occasion to catch up with Theo and Kevin, a lawyer and literature professor respectively. On this day in 2014, they have brought their families together to announce something that shakes all of them.  When the perfect relationship ends, is there hope for the rest of us?

Pancholy and Fitzgerald light up the stage as a vibrant couple with a symbiotic give and take.

Ken Urban’s newest play is extremely intellectual and explores the meaning of tragedy through dialogue but also through the plot. His writing is succinct and he thoughtfully guides the audience from one revelation to the next without dropping too much at once or treating them like they wouldn’t get it by over explaining. The majority of the play is a continuous scene happening in real time. However, the final scene is an ethereal epilogue which jumps between character and year and place as they tell the audience about their lives after the night of the dinner party.

Maulik Pancholy, who audiences may recognize from ’30 Rock’ or ‘Weeds,’ plays Kevin, the literature professor who has devoted his life to studying Kirkegaard. He recently took a teaching position is Oregon when Harvard and every other university near Boston denied him. Kevin left behind his husband Theo, played by Glenn Fitzgerald, who is a partner at a big law firm. They have been in a long distance marriage for a year at the time of the play.

Pancholy and Fitzgerald light up the stage as a vibrant couple with a symbiotic give and take. Both have beautifully wide emotional ranges that ebb and flow.

Theo’s parents were played by Naomi Jacobson and Greg Mullavey. They play a delightful couple. Jacobson is frenetic and high strung while Mullavey is very relaxed and gentle. The two work together to bring the comedy into the show but also have their moments of drama.

Danielle Skraastad plays Andrea, Kevin’s sister, who is “struggling” as the characters say every time someone asks “How is Andrea?” Skraastad bursts on the stage with a boisterous energy. She has a way of pulling the audience in and making them feel connected.

The large modern kitchen in the upscale apartment where the play is set was designed by Wilson Chin.

“The Remains” runs through June 17. For tickets and more information click here.