Theatre Review: ‘The Small Room at the Top of the Stairs’ at Spooky Action Theater 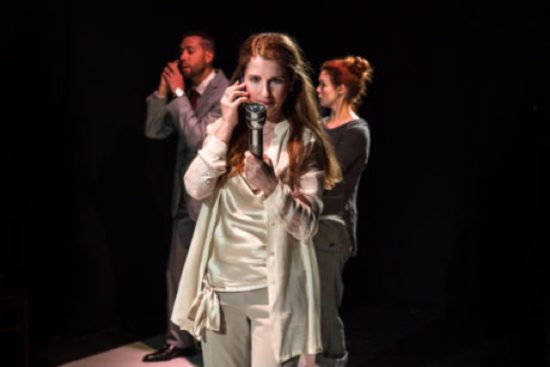 Casie Platt (center), Michael Kevin Darnall and Carolyn Kashner in The Small Room at the Top of the Stairs. Photo by Tony Hitchcock.

Now playing at the Spookey Action Theater, “The Small Room at the Top of the Stairs” by Carole Fréchette is an exploration of love, pain, and isolation. What starts out like a beautiful fairytale turns into something dark and eerie. Whatever the small room represents, be it the dark corners in our hearts, human’s uncomfortableness with isolation, or the place where one can go to let loose, it is scary but somehow lures us in. Maybe the room doesn’t represent anything and it truly is just a room. Either way, Grace is drawn to it but frightened by it.

…under the direction of Helen R. Murray. Her clear leadership and vision for this piece, partnered with the magnificent talent on stage created something beautiful.

Grace (Casie Platt) has just married the extraordinarily wealthy and loving Henry (Michael Kevin Darnall). Henry would do anything for Grace but he asks her to never go into the small room at the top of the hidden staircase. As Grace wrestles with her desire to go inside but also her desire to keep her promise to her husband, she hears the voices of her mother Joyce (Mindy Shaw) and sister Anne (Carolyn Kashner). Grace also must deal with the loyal maid in the house, Jenny (Tuyet Thi Pham).

Platt is a delightful actor who brings a vibrant innocence to the role. Her urgency and genuine struggle throughout the play would not draw the audience in without her clarity of character choices. Darnall is sultry and captivating as Henry. In general, he brings a gentle kindness to the character but in moments of rage, he is powerful and frightening. These two actors have a beautiful rapport on stage and make a charming couple.

Shaw’s proud and overbearing Joyce favors Grace over Anne. She is enthusiastic about Grace’s marriage and is always doting about how lucky her youngest daughter is. Kashner’s stubborn and no-nonsense Anne does not feel the same way, however, she still deeply loves her sister.

Pham is a straight-laced, honest Jenny whose micro-expressions are so subtle that the audience can hardly determine the changes in her demeanor. Pham moves silently about the space and always seems very serious.

This ensemble of five actors worked beautifully together as they flowed across the stage under the direction of Helen R. Murray. Her clear leadership and vision for this piece, partnered with the magnificent talent on stage created something beautiful.

The audience was seated in the round surrounding Jonathan Dahm Roberson’s set. The set contained a simple wood platform in the center and white pathways painted onto the floor.

This show is fascinating and thought-provoking. The audience will leave with plenty to discuss.

“The Small Room at the Top of the Stairs” runs through June 10. For tickets and more information click here