Theatre Review: ‘The Undeniable Sound of Right Now’ at The Keegan Theatre 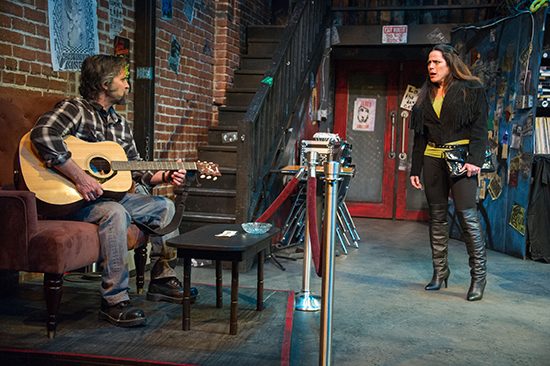 Cultural shifts and changes in the zeitgeist make great grist for art and entertainment, and Laura Eason’s enjoyable play, “The Undeniable Sound of Right Now” is no exception. A close look at a transitional moment in music history, Eason’s play makes its D.C. premiere at The Keegan Theatre in an intimate, well-crafted production featuring great music and excellent performances.

The show opens on Hank’s Bar, in 1992. The darker décor, posters of Hendrix and Siouxsie, and the litter from last night’s customers announce this as a hard rock café, literally. Hank’s bar, once the epicenter of Chicago’s music scene, may be facing hard times. A grizzled, gruff veteran of the scene, Hank (Chris Stezin) scowls to hear himself called “an institution” in a local newspaper piece praising the bar. Stubborn and a little set in his ways, he spars with those around him, including his ex-wife, Bette (Susan Marie Rhea), employee Toby (Kevin Hasser), and especially his daughter Lena (Jessie Power), who works at the bar and would like to expand the bar’s music offerings. The arrival of Nash (Ryan Sellers), a talented DJ and potential romantic interest of Lena’s, becomes a threat to the kind of music, and music philosophy, that Hank has built his life on.

Laura Eason’s script excels at sketching characters quickly and efficiently and has a nice ear for individual voices. With a small cast, the plot moves along swiftly as a series of one-on-one character duets. Many are quiet, as in Lena’s post-concert rendezvous with Nash, who is awestruck at being in Hank’s famous rock venue. “Anyone in music has been here at some time,” he marvels.

Chris Stezin as Hank brings a bit more volume to his scenes, especially as he fights with Lena about the future of the business after the bar’s rent increases, courtesy of their shady landlord (Josh Sticklin). Some of Hank’s choicest rebukes are saved for Nash, whose art form Hank completely distrusts. “It’s packaged, process, soulless” he spits. Stezin’s dynamic performance highlight’s the character’s brash aggression, as he confronts other characters, eyes wide and neck straining. He also brings out the character’s complexity, including his real affection for his daughter, and his belief in music as a meaningful art form.

Jessie Power as Lena and Susan Marie Rhea as Bette both turn in solid performances. Surrounded by strong male personalities, Power nicely communicates her character’s independence and conflicted loyalty, as she struggles with her father’s unwillingness to update the bar. Rhea embodies Bette as a pragmatic voice of reason, as well as the emotional center of this little community.

Ryan Sellers sells Nash’s charisma as the long-haired, backward-baseball-cap-wearing DJ who has real talent, and realer ambitions. If Hank is rock history, Nash is at least the present. While Nash respects Hank, he also sees music as a marketplace. “Is there such a thing as selling out anymore?” he asks. “Don’t we all want to be rich and famous?”

Directed by Brandon McCoy, the show is well-paced, with recognizable rock hits threaded throughout. The music that is discussed throughout the show is brought to palpable life by Veronica J. Lancaster’s sound design, especially in a scene where the bar hosts an unseen rave, with synth beats felt through the audience’s seats.

As the play nears its end, conflicts of money and music come to a head. As with any cultural shift, change cannot help but be bittersweet. The strongest meaning that can be taken from the ambiguous finale is that the future of music is female. If so, rock on.

Running Time: 1 hour and 50 minutes with one intermission.

“The Undeniable Sound of Right Now” is playing at The Keegan Theatre through May 27. For tickets or more information, click here.