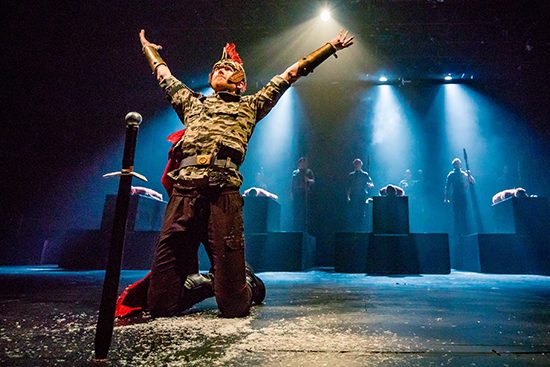 Theatergoers won’t need to have read the play in order to appreciate the story, though a brief perusal of the program’s plot summary will help. The production opens on a thrilling battle sequence in which Roman general Titus Andronicus (Philip Fletcher) faces the Goth clan. Goth queen, Tamora (Irina Tsikurishvili), kills Titus’s son in battle, only to be later captured by the Romans. As vengeance for his son’s death, Titus sacrifices Tamora’s eldest son. Tamora and her captive family are presented to newly-crowned emperor Saturninus (Dan Istrate) as the spoils of war. In a reversal, Saturninus falls in love with the Goth Queen and marries her, setting off a chain of power struggles and bloody avenging between Tamora and Titus.

Irina Tsikurishvili dominates the stage as Tamora as soon as she sneaks out of the shadows, demon-like. Goth queen by title, and aesthetic, she owns the bold outrageousness of the character in her red sequined dress and black leather gloves. Always an appealing performer, Tsikurishvili is as expressive in her characterization as in her movement; a scene that sees her anguish at her son’s murder turn slowly into steely resolve brings real human feeling to the outsize chaos that ensues.

As with Synetic’s other “wordless” productions, “Titus” depends on dance and movement to communicate its story. Ms. Tsikurishvili’s dynamic and diverse choreography is up to the challenge, both in large and smaller points of the storytelling. The early scene of the Romans burying their dead is a study in slow, ritualistic movement. Later, Tamora uses slinky and skilled footwork to show the Queen’s mastery over her new Roman husband, and her sons’ (Dallas Tolentino as Demetrius, Alex Mills as Chiron) maliciousness is telegraphed through their almost animal-like movement.

The sons’ malice, and specifically their obsession with Titus’ daughter, Lavinia (Irina Kvasadze), sees the show turn its darkest shade in a scene depicting her rape. While the assault is grim, it is not graphic, and Paata Tsikurishvili’s direction, along with Ms. Tsikurishvili’s choreography, frame the scene in a way that respects the character’s suffering without being gratuitous.

The show closes on an ill-fated dinner party, a ghoulish, gothic set piece that serves up plenty of revenge. Shakespeare’s story may be a tragedy, but Synetic’s production is also a frightfully entertaining triumph of  innovative storytelling.

Running Time: About 95 minutes with no intermission.

Advisory: Recommended for ages 16 and up due to mature content.

“Titus Andronicus” plays through May 27 at Synetic Theater. For information or tickets, call 866/811-4111 or click here.