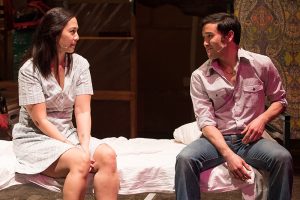 The elevator to Studio Theatre’s Stage 4 opens onto a corridor lined with crates, packing materials, and the stenciled words “Made in Vietnam.” Entering the tight performance space, the audience is presented with a scene out of a low-lit dive bar — highway signs and maps marking the states crossing the Southwest from Arkansas to California, surrounding a drum set labeled “1975” and some sparse furnishings.

An Asian-style food cart offers pre-show treats, incongruously tended by a man in a shirt reading “Arkansas.” That state’s flag hangs stage right, the flag of the Republic of Viet Nam stage left. These visuals introduce the world of “Vietgone,” as does the appearance of actor Jacob Yeh, portraying playwright Qui Nguyen — who assures us that this is not, repeat not, the story of how his parents met.

The story of how Quang, a South Vietnamese air force officer evacuated to the U.S. against his will, and Tong, a radically independent woman from Saigon, met in a refugee camp at Fort Chaffee does not seem like it would be fodder for comedy. But “Vietgone” is a very funny play. Nguyen, a writer for Marvel Studios, has a knack for using his focus on a few characters to comment on larger themes.

Studio Artistic Director David Muse calls it a “sex comedy,” and it is — Tong, bored in America, propositions Quang just because he happens to be there, and their initial disdain is just as hot as their coupling. Nguyen both plays with and undermines stereotypes with the character of Huong, Tong’s mother; Quang’s buddy Nahn starts off as a comedic sidekick but becomes something more.

Nguyen cleverly has his Vietnamese characters speak colloquial English, speckled with slang; the American characters they encounter, speaking a language they do not understand, speak only in nonsensical pop culture lingo to illustrate the failures of communication. This is both effective and hilarious. (It also makes it all the more jarring when, in a 2015 postscript, an older Quang suddenly has a thick Vietnamese accent.)

In addition to strong performances by the entire cast (particularly Marc Delacruz and Regina Aquino as the central couple), there are many clever touches to director Natsu Onoda Power’s production. Lighting designer Heather T. Gilbert uses flashing overhead lights to turn the set into Route 66 on Quang’s frantic road trip with Nahn; fight director Robb Hunter choreographs a kung fu movie-style sequence that is delightful. Most essential is Jeff Song’s score, which adds depth to the action of the script.

Though highly recommended, “Vietgone” is not perfect. Some of the usually crisp dialogue stagnates, especially in that postscript; that great fight scene lasts a little too long. “Vietgone” is also a musical, but it does not need to be. The songs are not nearly as strong as the score and serve to break the flow of the story rather than add to it. They could easily be excised without hurting this charming story in the least.

Running Time: Two hours and 40 minutes with one intermission.