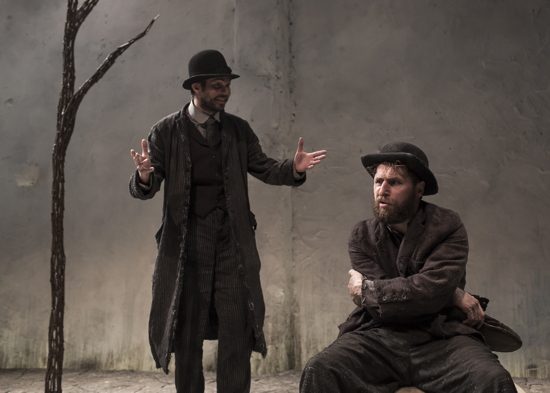 Marty Rea as Vladimir and Aaron Monaghan as Estragon in the Druid production of Waiting for Godot, directed by Garry Hynes. Photo by Matthew Thompson.

Samuel Beckett’s iconic work ‘Waiting for Godot’ follows two men, Vladimir and Estragon, as they wait for the elusive Godot. This existential tale of boredom and humanity is sure to leave the audience feeling uncomfortable if not confused. “Waiting for Godot” is Beckett’s most famous piece and he eventually won the Nobel Prize for Literature.

This production of “Waiting for Godot” breaths new life into a complex and compelling work of theatre.

This beautiful and shady production directed by Garry Hynes has been brought to Shakespeare Theatre Company by Druid, Ireland’s first professional theatre company outside of Dublin. Based in Galway, Druid is a company known for its bold interpretations and ambitious projects. They won four Tony Awards for the 1998 production of Martin McDonaugh’s “The Beauty Queen of Leenane.”

Estragon (Gogo) is played by Aaron Monaghan while Vladimir (Didi) is played by Marty Rea. Monaghan and Rea are an unstoppable team, a distressed and serious Abbott and Costello. They have mastered the comedy and the tragedy that lives within both of these characters as they wait and wait by the tree, or maybe a bush? From their physical comedy to their mastery of silence, it is extremely engaging to watch these two men do virtually nothing.

As Gogo and Didi wait, Pozzo arrives on the scene with his slave, Lucky. Pozzo, played by Rory Nolan, is a vain and cruel master. Nolan has a dynamic energy that and commanding presence. Lucky, played by Garrett Lombard, does what his master says, including deliver a rambling monologue which sounds like something out of James Joyce’s ‘Ulysses.’ Lombard’s performance pulls at the heart and his physicality is remarkable.

Local actor Malcolm Fuller performs the role of Boy, Godot’s personal messenger. He arrives in each act with the gentle and sweet demeanor. This young actor captivates the audience and pulls a tenderness out of Rea’s Didi.

Francis O’Connor acted as the Scenic and Costume Designer on this production. One can not help but study the set, which is bare, but also beautifully complex. The stained paper hues almost remind the audience of shadow puppets or an old children’s book. The whimsical curve of the bare tree on stage is similar to something one might see in a Tim Burton film. These design elements all come together to help tell the story in a beautiful way.

The lighting was designed by James F. Ingalls. With this, the audience was able to see the passing of the day. It was also used as a storytelling technique to highlight certain moments of deep emotion.

Sound Designer Greg Clarke did an extraordinary job of adding sound into the background of the story but never taking away from Beckett’s desire for silence. It blended in with what was happening so well, the audience might not have even noticed it was there.

This production of “Waiting for Godot” breaths new life into a complex and compelling work of theatre. This show is certainly not everybody’s taste but recognizing its value to 20th-century playwriting is so important.

“Waiting for Godot” runs at the Lansburgh Theatre through May 20. For tickets and more information click here.