1. ‘Harvey’ at The Little Theatre of Alexandria.

“…the cast was excellent. Together they told a seamless story, their transatlantic accents and consistent energy carrying the audience along for the ride.” – Kaley Beins.

Synopsis: Imaginary friends can be whoever — or whatever — you want them to be, even a six and a half-foot tall rabbit. When Elwood starts introducing his imaginary rabbit friend, Harvey, to guests at a party, his sister can no longer tolerate his inebriated antics and worries about her family being exposed to this imaginary rabbit. However, after years of living with Elwood (and Harvey), she begins to start seeing him herself. 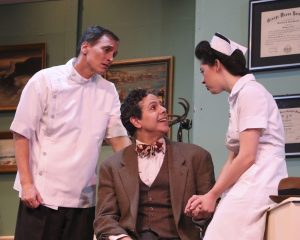 Synopsis: From the dawn of time, women have been demonized, feared and objectified whenever their power challenged the traditional order.   Weaving a thread from the Salem Witch trials through modern day politics, this world premiere musical examines the complex and compelling stories of women who’ve been labeled as witches throughout the centuries.  Building on their beautifully crafted productions of The Turn of the Screw,  Monsters of the Villa Diodati, and Kaleidoscope, Conner and Smith bring us their next highly anticipated “Bold New Work.”  Funded by Jon Wiant, Mike Blank and the Bold New Works for Intimate Stages donors. 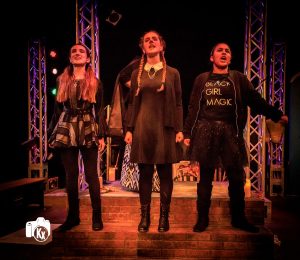 3. ‘Catch me if you Can’ at Dundalk Community Theatre.

“…this particular production of “Catch me if you Can” is a fabulous one that is sure to satisfy young and old alike.” – Kristen Price.

Synopsis: Based on the hit film and the incredible true story, Catch Me If You Can is the high-flying musical comedy about chasing your dreams and not getting caught. 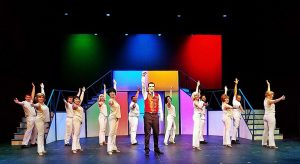 Synopsis: Noel Coward’s 1941 classic comedy, centers around socialite and novelist Charles Condomine, who invites Madame Arcati, the local spiritualist and medium, to his house to conduct a séance, hoping to gather material for his next book. The scheme backfires when he becomes haunted by the ghost of outspoken first wife, Elvira. Elvira makes continual attempts to disrupt Charles’s marriage to his second wife, Ruth, who cannot see or hear the ghost. Worldly and unworldly personalities clash in a battle to see which “blithe spirit” wins! 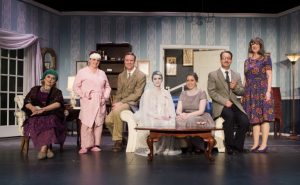 5. ‘The Crucible’ at Olney Theatre Center.

“Under Eleanor Holdridge’s meticulous, first-rate direction, the ensemble cast of 19 talented actors leaves nothing on the stage…” – Steve Charing.

Synopsis: Arthur Miller’s classic 1953 play about the Salem witch trials spoke truth to power and lit a blazing candle against the “Red Scare” rather than cursing its darkness. 65 years later, it comes to the Olney stage for the first time. In Salem of 1692, unseen and unseeable evil stalks the town, threatening to destroy the lives and eternal souls of the God-fearing colonists. A clique of young girls are the only ones capable of unmasking the terror allegedly caused by hidden witches and devil’s consorts. Embraced by ecclesiastical and political powers, the girls’ reign of terror settles old scores, uncovers ugly truths and leaves a trail of carnage. The Crucible maintains its power today for its masterful language, flawed heroes and the timeless reminder of what can happen when truth is bent to political convenience. Featuring Chris Genebach (My Fair Lady, Carousel) as John Proctor. 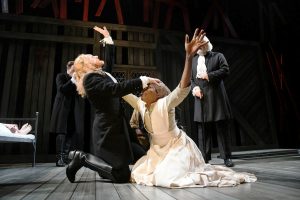