1. ‘Priscilla, Queen of the Desert’ at Kensington Arts Theatre.

“…I recommend “Priscilla, Queen of the Desert” as a fun-filled performance with strong performers and a nostalgic soundtrack.” – Liz Ruth-Brinegar.

Synopsis: Adapted from Elliott’s 1994 film The Adventures of Priscilla, Queen of the Desert, the musical tells the story of two drag queens and a transgender woman, who contract to perform a drag show at a resort in Alice Springs, a resort town in the remote Australian desert. As they head west from Sydney aboard their lavender bus, Priscilla, the three friends come to the forefront of a comedy of errors, encountering a number of strange characters, as well as incidents of homophobia, while widening comfort zones and finding new horizons. 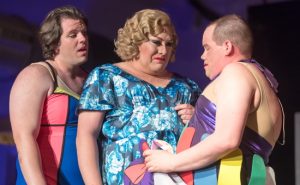 “…“Incredibly Dead!” provides all the essential thrills, chills and laugher to make for a fantastic night of theatre.” – April Forrer.

Nearly twenty years ago, General Maximilian Morder devised a plan to bring order to the world with the aid of a mysterious goo. Things didn’t pan out. Now, the elixir is in the hands of Reggie and Silas Cryptz – two moronic morticians who have drawn the vile ire of a family they’ve cheated in the past. The antics of our heroes will lead to monstrous results, and a dire intersection with fate.

“Incredibly Dead!” is pure B-horror: cheap thrills, intestine-length twists, and blood-drenched fun. The show is set to rockin’ tunes that pay homage to spine-tingling classics, and will sever tapping toes! This is pure, unadulterated fun (lots of people die, but we swear, you’re going to enjoy watching them die).

Due to adult language and people like, you know, dying and what not, we consider the show rated “R.” We want you to come to the show and laugh and clap and cheer and stuff…you know, have a good time! Let’s avoid upsetting younger folk though, because that is not cool. 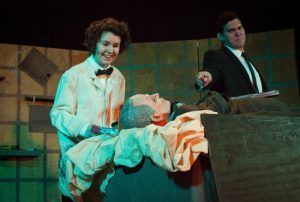 3. ‘The Undeniable Sound of Right Now’ at The Keegan Theatre.

Synopsis: It’s 1992. Chicago. Hank is struggling to keep his legendary rock club going amid changing times and changing tastes. But when his beloved daughter, Lena, starts dating a rising star DJ, Hank must contend with the destructive power of the Next Big Thing. Like a blast of feedback from a Fender amp, Laura Eason’s (Sex with Strangers, “House of Cards”) THE UNDENIABLE SOUND OF RIGHT NOW brings to hilarious and heartbreaking life the moment when Kurt and Courtney ruled, but Moby was just around the corner… 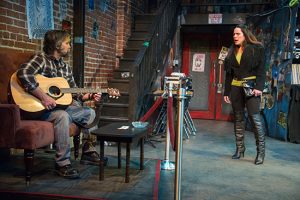 4. ‘Jekyll and Hyde – The Musical’ at Third Wall Productions.

“Third Wall Productions has turned in another well-conceived show with excellent direction, polished leads, a chorus that sings their scary heart out…” Timoth David Copney.

Synopsis: The epic struggle between good and evil comes to life on stage in the musical phenomenon, Jekyll & Hyde. Based on the classic story by Robert Louis Stevenson and featuring a thrilling score of pop rock hits from multi-Grammy- and Tony-nominated Frank Wildhorn and double-Oscar- and Grammy-winning Leslie Bricusse, Jekyll & Hyde has mesmerized audiences the world over.

An evocative tale of two men – one, a doctor, passionate and romantic; the other, a terrifying madman – and two women – one, beautiful and trusting; the other, beautiful and trusting only herself– both women in love with the same man and both unaware of his dark secret. A devoted man of science, Dr. Henry Jekyll is driven to find a chemical breakthrough that can solve some of mankind’s most challenging medical dilemmas. Rebuffed by the powers that be, he decides to make himself the subject of his own experimental treatments, accidentally unleashing his inner demons along with the man that the world would come to know as Mr. Hyde. 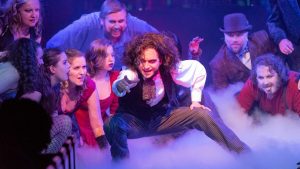 5. ‘Waiting for Godot’ by Druid at Shakespeare Theatre Company.

“This production of “Waiting for Godot” breaths new life into a complex and compelling work of theatre.” – Elle Marie Sullivan.

Synopsis: Lingering by the side of the road, killing time with hat tricks and half-remembered stories, Estragon and Vladimir dawdle through one of the greatest dramas of the 20th century. In Waiting for Godot, Samuel Beckett’s absurd, anarchic exploration of time, life is vaudeville and tragedy, philosophy and confusion, teetering on the edge of despair, yet tuned with Beckett’s unique blend of poetry and humor. 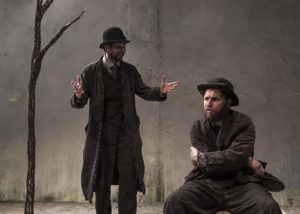 Marty Rea as Vladimir and Aaron Monaghan as Estragon in the Druid production of Waiting for Godot, directed by Garry Hynes. Photo by Matthew Thompson.