Concert Review: ‘A Child of Our Time’ performed by Chesapeake Choral Arts Society 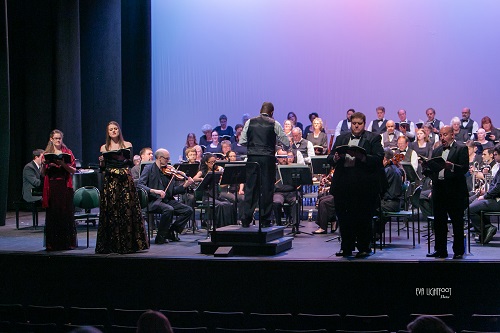 The Chesapeake Choral Arts Society performing “A Child of Our Time” at the College of Southern Maryland June 9-10th, 2018. Photo courtesy of Eva Lightfoot Photos.

From the beginning of time, music has been used to portray the emotions of the human spirit. It has captured experiences, transported us to other worlds, and triggered emotional reactions from all who listen. The ability to capture a feeling, isolated instance or emotion in a series of well-thought-out moments of music is one to be envious of, and a talent clearly possessed by Sir Michael Tippett. Yes, he was able to capture more than just a single feeling, moment, or emotion in his composition “A Child of Our Time.” This composition captures the story of a young man during WWII, and may easily be one of the most stirring arrangements I’ve encountered. When I heard that the Chesapeake Choral Arts Society was performing this piece, I was intrigued to see it brought to life.

At the beginning of the performance, the president of the society, Carol Charnock, made the audience aware of Tippett’s purpose behind the composition of “A Child of Our Time.” In the midst of WWII, the music begins with the sound of winter and continues in this dark, dissonant sound for much of the performance. This dissonance, while not pleasing to the ear, serves its purpose well to create the bleak, dark, horrifying atmosphere that this young man faced when his parents were mistreated by the Nazi’s. She also shared that the choir had experienced a bumpy road to opening night. Acquiring a new tenor soloist a few days before opening, piecing together an orchestra, and having to pull the associate director Leroy Presley into the conductor position were just a few of the challenges this choir faced to put on this performance. Yet, the professionalism of their performance nearly disproved these truths. I was simply in awe of the talent featured on stage, both in the choir and the orchestra, and ‘enjoyed’ each moment I spent immersed in their incredible sound.

From the moment that the Chesapeake Choral Arts Society first graced the stage to the moment they sang their final note, the cacophony of sounds was indescribable. Tippett’s composition captures so many emotions within its three parts, and the choral group performed each with ease. The four soloists featured in the performance were breathtaking. Amy Statz Dolan (soprano soloist), Hannah Baslee (alto soloist), Jonathan Hoffman (tenor soloist), and Antony Zwerdling (bass soloist) astounded the audience again and again with their incredible voices and comprehension of this difficult score. To then hear the news that Jonathan Hoffman had joined this performance only a few days before was truly incredible! The choir offered an anchoring sound to the talented foursome, accompanied by a very talented orchestra of musicians, which transcended time and space to transport the audience back in 1942.

The only critique I have for this choir was the difficulty I had with understanding some of the choral arrangements. It appeared that choir served as a ‘Greek chorus’ to the four soloists, which they certainly did well. However, I couldn’t always tell what the chorus was actually singing. The program provided written words for each song, but I think that some of the diction in the performance was lost in the beauty of the sounds. This did not detract from Tippett’s creation but made it a little more difficult for me to place where we were in the show.

I used the term ‘enjoyed’ earlier, but I fear that word is misplaced with regard to the intent and subject matter of Tippet’s composition. This artistic masterpiece was never written to leave the audience fulfilled, or to provide an atmosphere of enjoyable music. Rather, it was written to capture the pure despair and anger one feels at the recollection of the horrors experienced during WWII, specifically with regard to the Nazi terror reigning down onto the persecuted Jews. It holds a deep and powerful message that is absolutely relevant today. Everyone has a story that has shaped them, and we must seek to rise above the darkness of our past and chase the shadow of light that will ultimately determine our future.

Running Time: Approximately 1 hour and 15 minutes with no intermission.

“A Child of Our Time” will be performed by the Chesapeake Choral Arts Society at the College of Southern Maryland in La Plata, MD June 9-10, 2018. For more information, or to purchase tickets, please see here.