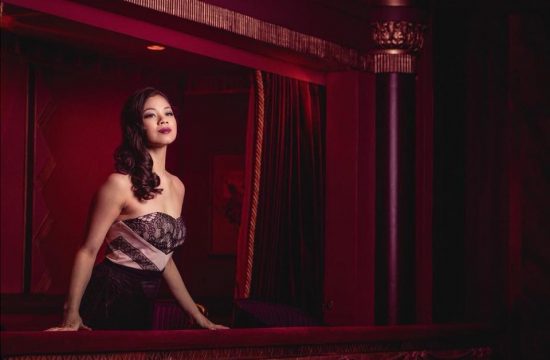 “Music is the reason why I know time still exists.” This line from Elisa’s song “Dancing” embodied the spirit of Broadway and West End performer Eva Noblezada’s Cabaret set this past Sunday at AMP Strathmore.

Noblezada’s meteoric rise in the theatre world is the stuff of a film like “A Star is Born.” A student at Northwest School of the Arts in Charlotte, NC, Noblezada was selected as one of 5 finalists for the National High School Musical Theatre Awards in 2013. During the awards ceremony in New York City, Noblezada was spotted by a casting director and the next thing she knew, she was auditioning for famed theatre producer Cameron Macintosh. He was staging a West-End revival of his iconic show “Miss Saigon,” and he offered the then 17-year-old Noblezada the leading role of Kim. The next few years were a whirlwind for Noblezada as she stared in the West End, first in “Miss Saigon,” then, following in original Kim Lea Salonga’s footsteps, she took over the role of Eponine in the London production of “Les Miserables.” Noblezada’s time in London was lucrative, with two huge roles and a Whatsonstage award for her role as Kim. She then came to New York to reprise her role as Kim in the Broadway revival of “Miss Saigon,” and garnered a Tony nomination for Best Actress in a Musical.

While her singing voice is impeccable, she brings more than that to her show. She truly became the character or person that sang the song as she sang it; she embodied them.

After she finished her time as Kim, Noblezada decided that she wanted to share more of who she really is, through performance of music that she loves. She launched a Cabaret series titled “Girl No More.” This was not only an opportunity to show her fans a different side of her but also a chance to show the theatre community that the girl has now become a woman. In addition to sharing meaningful songs, she also shared stories, lessons she’s learned along the way, and a few f-bombs too. This series brought her to North Bethesda this past Sunday night, at AMP Strathmore’s warm and intimate venue to conclude the “Girl No More” series.

Noblezada took the stage with her accompanist, British composer Jude Obermuller, on a shiny grand piano. She started off the show with “Let’s Be Bad,” an original song from the TV show “Smash.” The song, intended for a fictional Broadway musical about the life of Marilyn Monroe, was the perfect kick-off tune. It was spicy and full of sass, and Noblezada delivered it with a clear tone and irresistible joie de vivre. Noblezada shared that this was her first time in Maryland and that she felt so blessed that the audience had all come out to see her perform. Her next song was a personal favorite of this reviewer, “When I Look at You,” from the musical “The Scarlet Pimpernel.” This song was an excellent example of the power of Noblezada’s performance style. While her singing voice is impeccable, she brings more than that to her show. She truly became the character or person that sang the song as she sang it; she embodied them. It was impressive to watch her transformation as she delved into each character.

Throughout the evening, Noblezada shared more than songs; she also shared some very honest and personal stories of her journey to and beyond her dreams. She discussed the challenges of being a “Mexicasian” in the theatre world, and the challenge to find diverse and varied roles as a performer of color. She also discussed how an unfortunate interaction with a callous costume designer almost derailed her career due to an eating disorder. But she was able to seek help and get better. She dedicated her beautiful rendition of “To Make You Feel My Love” as a reminder to everyone that “you’re not alone.”

She also performed not one, but two tunes from one of her musical idols, the gifted and gone-to-soon Amy Winehouse. The first was a fun and jazzy rendition of “You Know I’m No Good,” her brown eyes sparkling with mischief. She also performed a soulful rendition of “Me and Mr. Jones.” There were several other highlights, such as the song “Dancing” that was referenced at the beginning of this review, a fantastically fun “Diva Medley,” featuring songs from the likes of “Wicked” and “Hamilton,” and of course, a song from the show that changed her life, “Miss Saigon.” She performed her favorite song from the show, the powerful and heartbreaking reprise of “Sun and Moon.”

Noblezada was incredibly fresh and charming during the performance; her talent and effervescence were undeniable. She embraced the title of the show by rocking a sexy black bra and sheer top, paired with black palazzo pants. Or as Noblezada said, “dressed like a cast member of ‘Chicago'”. She also had a bubbly energy while she talked between sets, throwing ballet dance moves to punctuate her stories. Eva Noblezada is undoubtedly an immense talent with a bright career ahead of her; this reviewer is excited to see what she has coming up next.

While Eva Noblezada’s performance was a one-night-only engagement, Michael Feinstein’s Cabaret series will have its next performance on July 14th with Jazz legend Marilyn Maye. Past performers are Broadway stars Laura Osnes from “Rodgers and Hammerstein’s “Cinderella and “Bandstand,” and John Lloyd Young of “Jersey Boys,” fame.