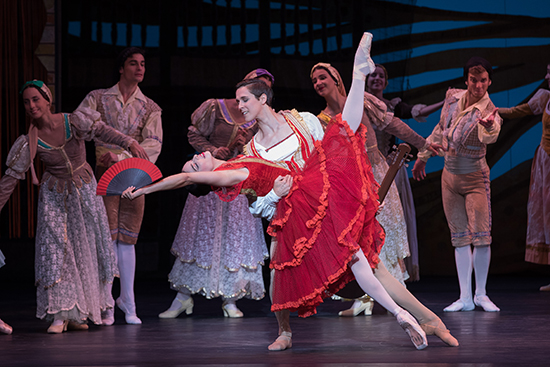 The Ballet Nacional de Cuba is back at The Kennedy Center, and with a flourish. The ballet troupe, with founder Alicia Alonso as general director, began this tour with a virtuosic performance of “Don Quixote,” a production that encapsulates the company’s unique fusion of technical perfection and bold, joyous energy.

“Don Quixote” takes its source material from a short episode of Cervantes’ literary masterwork, which follows the adventures of a chivalric knight. Opening in 19th century Spain, the titular knight, Don Quixote (Yansiel Pujada), and his trusty squire, Sancho Panza (Dairon Darias), are asked for help by local villagers. Quixote’s services are required by Kitri (Viengsay Valdés), the most beautiful woman in the village, and her lover Basilio (Dani Hernández), the town barber. Though the two are in love, Kitri’s father, Lorenzo (Félix Rodríguez), rejects the match, and would rather she wed the rich, French nobleman, Camacho (Ernesto Díaz). A defender of love, Quixote facilitates Kitri and Basilio’s escape, with Kitri’s father in hot pursuit.

…a production that encapsulates the company’s unique fusion of technical perfection and bold, joyous energy.

Based on the original Bolshoi choreography by Marius Petipa, Alicia Alonso’s vision of Don Quixote works to restore some of the Spanish folkloric and cultural aspects of the story and music, showcased especially in the first Act. The intricate embroidery and vivid colors of Salvador Fernández’s costumes beautifully capture the Iberian aesthetic of the setting, and the percussive rhythms of Ludwig Minkus’s score are brought onstage in the form of tambourines. Overall, the energized opening act provides a sense of welcoming, communal enjoyment, impressively supported by Giovanni Duarte as conductor of the Kennedy Center Opera House Orchestra, and consistently encouraged by an enthusiastic audience.

Resplendent in a red, ruffled dress, Viengsay Valdés as Kitri takes center stage, literally and metaphorically, imbuing the character with the same effortless confidence that she shows in her dancing. A role that requires technical mastery, Valdés more than meets the challenge, executing some incredible pirouettes and expert balancing. She is wonderfully partnered by Dani Hernández, who plays Basilio with a confident swagger and appealing grin.

Special mention goes to Ariel Martínez as Espada, the strutting bullfighter with charisma to spare. The scene of his arrival, along with his fellow bullfighters, is a visually striking sequence full of swirling red capes. Ginett Moncho as Mercedes, Espada’s lover, also impresses, and their duets provide some of the best sequences of the show.

The vibrancy of the first Act gives way to more classical arrangements of the second, as Kitri and Basilio flee into a moonlit landscape. The near-improvisational feel of the opening transitions to the beautiful, symmetrical lines and rhythms of classical ballet. The shift in tone is underscored by Salvador Fernández’s painted storybook sets and the understated lighting design by Ruddy Artiles.

Delicate and dream-like, the second Act gives way to the third Act’s conclusion, humorous and happy. Before the curtain fell, our audience was treated to an even happier ending, as Alicia Alonso greeted the audience from the stage. The standing ovation for this “first lady of ballet” placed the exclamation point at the end of an exhilarating evening of dance.

The Ballet Nacional de Cuba will perform at The Kennedy Center through Sunday, June 3. Performances of “Giselle” began Thursday, May 31. For tickets or more information, click here.