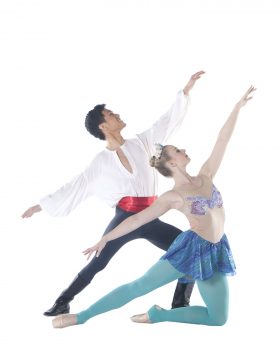 An instant Disney classic, “The Little Mermaid” animated film has captivated audiences for almost 30 years. However, transitioning from a charming cartoon with witty banter to a full-length ballet is no easy task. Directors Peter Commander and Rebecca Friedman who co-founded Charm City Ballet had to choreograph for dozens of dancers and rely on an innovative creative team to reimagine the story in dance. Their open auditions yielded a talented and ethnically diverse cast, particularly for ballet. Dancers of all ages covered the stage and told the story.

A well-known story to any Disney princess fan, “The Little Mermaid” tells the tale of Ariel (Eve Holmes), the merman King Triton’s (Blake Caple) youngest daughter and her curiosity about the human world. Accompanied by her best friend Flounder (Ellen Bast), Ariel has all sorts of adventures—most of which her father would not approve of. After saving Prince Eric (Chris Cho) in a shipwreck, Ariel falls in love. When her father forbids her from seeing Eric again, she makes a deal with the evil seawitch Ursula (Rick Southerland) to become a human. Between Ariel’s faux pas at the palace and Ursula’s plotting, is true love even possible for this couple?

The energy they brought to their performance reinvigorated the storyline and allowed for a mostly seamless transition from the dialogue-heavy original. This is a dance company to follow.

A mark of talented dancers, it was impressive that Commander, Friedman, and their dancers were able to tell the complex story with only their bodies and no dialogue. Although some of the dances started shakily with dancers hindered by an overly crowded stage, the ballet was enjoyable. Two dances, in particular, stood out. First, the storm and shipwreck choreography in Act 1 was phenomenal. Dancers dressed in bluish gray leotards spun around the sailors, pulling them back and forth like waves buffeting a doomed ship. It was one of the most realistic of the dances and the time where the dancing connected to the storyline most clearly. The other notable dance occurred in Act II when the palace cook Chef Louie (Blake Caple) instructs his sous chefs to prepare lobsters for that evening’s dinner and the younger dancers carried in their friends dressed as lobsters. A cute chase scene ensued with the lobsters, led by Sebastian (Molly Feldbush), refusing to be boiled.

Individual cast members stood out also. While many cast members focused on the gracefulness of their dancing at the expense of their characters, Flotsam and Jetsam (Madison Bonvissuto and Spenser Shanahan), combined the poise of their moves with purposeful additional moves that demonstrated that their characters were eels. They tilted and twisted their heads and always worked to elongate their bodies. The seahorses (Sage Chng-Lim and Olivia Miller) stood out for their energy and precision, particularly in dancers so young. Scuttle (Tabitha Discher) and Ursula (Southerland) embraced the physicality of their roles with Discher working birdlike struts into her dancing and Southerland really embracing every hip pop and thrust. Additionally, as a whole, the cast did an excellent job of employing levels, so that their composition was interesting and caught the eye.

Finally, the costumes (Jes Carter, Peter Commander, Jo Ann Holmes, TLine Costumes), set design (Peter Commander Sr., Tammy Commander), and lighting (Todd Mion) all brought the show to life. The costumes were very creative with umbrella jellyfish, eyeball stalk headbands, and swaths of gauzy fabric at every turn. The colors swirled together as the cast danced its way across the stage. The set design and dressing were also impressive; foam coral rose out of the floor for the undersea scenes, and a fog machine paired with a helm created a ship and harbor. Finally, the lighting did everything from making the eels glow neon green to highlighting the dramatic moments with spots. Every part of the creative team showed extraordinary attention to detail.

Charm City Ballet’s “The Little Mermaid” was a whimsical production full of young dancers beginning their careers. The energy they brought to their performance reinvigorated the storyline and allowed for a mostly seamless transition from the dialogue-heavy original. This is a dance company to follow.

Charm City Ballet performed three shows of “The Little Mermaid” on Saturday, June 9th and Sunday, June 10, 2018, at Gordon Center for Performing Arts. Future performances and more information about the ballet school and its auditions can be found here.