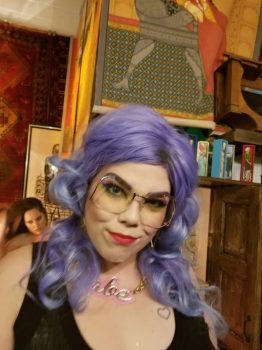 Stillpointe Theatre kicked off their annual fund-raising gala at a quirkily perfect locale, Wishbone Reserve, with a theme that was right up their distinctive alley.  Dubbing the gala Wigstock, it was a perfect choice to highlight the upcoming season and spotlight some of the company members and invited performers, in a space that was so welcoming and interesting that the guests were fascinated as much by the surroundings as they were by the entertainment.

Wishbone Reserve is the cool, vintage home furnishings store in Hampden where Ryan Haase, Artistic Director of Stillpointe and his two partners, Julie Lilienfeld and Athena Hoffberger hosted the event.  Since this was a fund-raising gala, there were special VIP tickets for a meet and greet with several of the founding members of Stillpointe.  I used the time to speak with a few of them and was delighted to find out a little of how each of them came to be a part of this shiny little theatre troupe that always seemed to me to be one of the most fearless in the area.

Stillpointe has built its reputation on doing the unexpected, seldom seen shows that most others don’t dare to produce.  That has a lot to do with the creatives running the show, most of them founding members along with Haase.  Shows like “Bat Boy,” “Trouble In Tahiti” and “Grey Gardens” have all turned up on their bill.  Audiences seem to appreciate their outré approach and Wigstock was a perfect chance for the fans to see the team in a funky and classy setting.

Stillpointe grew out of the bonds of friendship formed by a group of students during their days at Towson University’s drama department.  This talented bunch of folks all scattered after graduation, only to come back together to form a theatre company.  I asked several of them why.

Nicholas Staigerwald, one of the founding members, said, “We wanted to project a different aesthetic.  A group with a ‘family background’  (the closeness from their days at Towson) made it easy.”  While they have performed at various venues, they gravitate towards unusual spaces, like the old Mercury Theatre on Charles Street.  Staigerwald says the spaces helped define the shows.  That’s understandable, given the outsize talent of Haase’ set designs, a field in which he is making quite a name for himself both with Stillpointe and far beyond.

…wigs off to them, go see them and cheer this fabulous group on to another stellar season!

Danielle Robinette is Stillpointe’s Managing Director.  When I talked to her, she summed up nicely what so many of the members said. “We wanted it to be ours.  We all worked around town at other theatres, but we wanted to make our own.  We saw a niche and knew we could fill it. We didn’t want to just think outside the box, we wanted to repurpose the box.” The other members I met at the Gala, Grace Anistasiadis, Cory Raum, Stacey Antoine, Ben Shaver, Stacey Antoine and Charlie Long all echoed the same sentiments.

The entertainment on display during the gala was as exceptional as one might expect from this group.  With a theme like Wigstock, many in the audience wholeheartedly embraced the night with outrageous hair pieces, glitter make-up and fabulous fashions.  Of course, the hottest talent was the bevy of Drag Queens.  Some of the best in the business showed up to lend support.  Venus Fastrada, DeeDee Derion, Lyric Bourdeaux, Washington Heights, and Anastasia Mae Belladonna strutted their stuff and left the crowd cheering for more. Those girls all knew how to work the stage like they were born there.

My favorite of the night was Ms. Belladonna’s interpretation of ‘I’m Here’ from “The Color Purple.”  Wearing a simple maroon wrap-dress and minimal makeup, she brought down the house with her powerful performance, proving that it’s not always just about the package.  Sometimes, it’s the product that sells.  She didn’t need the usual trappings found in dragdome.  She was natural, earthy and totally gorgeous. Another standout was the fabulous Venus Fastrada.  The statuesque beauty did a hilarious parody of Elain Stritch’s ‘Ladies Who Lunch.’  This one, titled ‘Ladies in Drag’, has lyrics like, “Here’s to the ladies in drag, everybody clap. Covered in makeup to hide all our sags; spilling cocktails in our laps.” She had the audience roaring and on their feet when she finished.

The other performers were drawn from Stillpointe’s talent pool.  Adam Cooley got the night off to a great start, doing ‘Wig In A Box’ from Hedwig and the Angry Itch.  He may have missed a line or two, but he’s such a pro that he let the audience in on it, smoothed it over with snappy patter and moved on.  Very cool. A company member, Adam will be helping out during the new season, but is not currently scheduled to appear in anything, something I hope changes soon!  He was accompanied by the always lovely Stacey Antoine, who will be on board this season as music director for two shows.

Amber Wood did a great job singing and accompanying herself on ‘Breath Again’ and returned later in the show to do one of my favorites from “Cabaret,” ‘Maybe This Time.’  Amber is a company member but is not slated to appear in the coming year’s lineup. 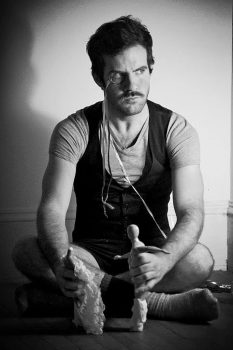 The ineffable Danielle Robinette sang a very darkly funny song called ‘All Fall Down’ by William Finn.  In her purple wig and black onesie, she was as striking visually as she was vocally.  I had to tell her afterward, “I had no idea that 1) you were so funny and 2) you could sing like that!”  A lovely surprise.  Knew I liked that woman – now I have two new reasons why.  Founding member Danielle will be seen on stage this season in “Urinetown” as well as her work behind the scenes as Managing Director.

There were siblings on display as well.  The fabulous Paradiso kids.  Sister Chelsea did her take on ‘Unworthy of Your Love’ from “Assassins,” the kind of off-center musical that Stillpointe loves to tackle.  Ben Shaver provided his usual superb piano skills.  Both Chelsea (performing) and Ben (Musical Director) will be involved with the season to come.  Brother Michael is a skilled puppeteer and wowed the crowd with his monologue from “Hand to God,” another show from Stillpointe’s archives.

Haase was very up-front about why this season skews a little more towards the popular, well-known musicals, rather than the edgy ones Stillpointe prefers to embrace.  “You have to do the big shows sometimes, so you can pay for the original ones the next season.  I’d rather pay the money (royalties) to live composers who need the money more than the dead ones.”  Makes sense to me.  You have to put the butts in the seats to pay for all the shows and, as much as we artists hate to admit it, sometimes it’s about show business, rather than purely the art.  In the hands of the uber-talented crew at Stillpointe, they can walk the line like the seasoned professionals they all are.  And Baltimore is the perfect place for them.  So wigs off to them, go see them and cheer this fabulous group on to another stellar season!