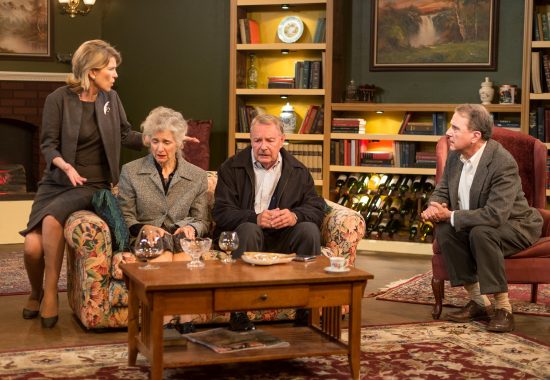 With Fred Zirm’s mounting of “A Delicate Balance,” Silver Spring Stage has created a very good production of a very odd play.

The action takes place in the living room of long-married Agnes (Alexandra Tydings) and Tobias (Louis Pangaro, returning to the role he played at Peace Mountain Theatre Company in 2016). Andrew S. Greenleaf’s set is one of those too-clean upper-middle-class sitting rooms, meant more to be admired than lived in. This carefully assembled space will be invaded over the course of the play by several interlopers.

Agnes and Tobias are a happier couple than Martha and George of Albee’s “Who’s Afraid of Virginia Woolf?” though just as prone to lubrication. Alcohol flows freely in their domicile, much of it down the gullet of Agnes’s live-in sister Claire (Susan Harper), a one-woman chorus wisely and cynically commenting on all she sees while avoiding any definitive action herself.

This inebriated status quo is disrupted by the unexpected arrival of Edna (Declan Cashman) and Harry (Craig Miller), the best friends of the central couple, or so all four repeatedly insist. It’s clear that this is one of those friendships that stops at the door of the office or the oft-mentioned “club” — these people have nothing in common but their artifices and their societal status.

Here Albee shifts to surrealism. This stolid pair had been overcome by an indefinable existential dread and fled their own comfortable home. Edna and Harry have come to stay, with no plans other than to hide from what Tobias will dub “the Terror.” Their presumption forces Agnes and Tobias to consider how far they are willing to go for these supposed dear friends.

Finally, the arrival of daughter Julia (Diana Arnold), retreating from yet another failed marriage, adds a catalyst to the tension in the crowded house. With too many personalities and too little space, the façade of equilibrium is smashed.

Tydings and Pangaro are ideally matched. Tydings plays Agnes with a brittleness that is complemented and contrasted by Pangaro’s urbanity. (The understatement Pangaro offers early on makes Tobias’s final screaming breakdown all the more effective.) Tydings is able to express malevolence and affection with the same slight smile.

Harper is impressive as Claire, the most self-aware of the bunch despite (or perhaps because of) her cheerful dipsomania. Claire has no illusions about who she is, and is quite content to wallow in her perennially pickled state.

The failings here with the legendary playwright, not with Zirm’s fine cast. The shift from the real to the surreal is at first effective, creating an air of creepy foreboding. But his intent is obscure, and an interminable third act, which serves no purpose but to reiterate the second in weaker terms, deflates any outstanding tension. Albee, like Edna and Harry, wears out his welcome.

[Full disclosure: I have worked with Silver Spring Stage as a performer, but not with this particular director or artistic team.]