Theatre Review: ‘Botticelli in the Fire’ at Woolly Mammoth 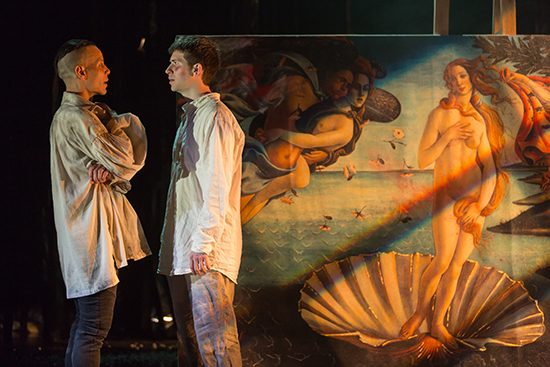 Woolly Mammoth kicks off Pride month enthusiastically with its splendid new production of “Botticelli in the Fire,” a celebratory mix of the sacred and profane that is sure to please.

Directed by Marti Lyons, the top of the show finds Sandro Botticelli (Jon Hudson Odom), the famed Renaissance painter of the Birth of Venus, introducing himself to the audience, bottle in hand. “This isn’t going to be another tortured … sob story,” he says. “Ok maybe it is,” he admits. What follows is both historical fantasy and meta-history, as Botticelli narrates the events of his own life. Blessed with the patronage of Lorenzo de’ Medici (Cody Nickell), the most powerful man in Florence, Botticelli pursues the many pleasures of life on the town with his best friend Poggio di Chullu (Earl T. Kim). A commission to paint Lorenzo’s wife, Clarice (Alyssa Wilmoth Keegan) leads to complications, personal and professional, which develop against a backdrop of Florence gripped by plague, as well as the dangerous charms of a new “street preacher,” Girolamo Savonarola (Craig Wallace).

Playwright Jordan Tanahill’s queering of the story extends not only to Botticelli’s bisexuality, but also the non-linear structure and embellishment of the historical record. Here, Leonardo da Vinci (James Crichton, excellent) works as Botticelli’s talented new apprentice, though it’s unclear if the two met in real life. The 15th-century story fuses with realities of modern 21st-century life, providing some of the funniest moments of the show. Characters text on smartphones, and speak in modern American English (“Girl was fierce,” Poggio claims about Botticelli). Cloth of gold gowns is juxtaposed with Ralph Lauren sportswear.  The desperate mobs, angry at the administration’s inaction in the face of plague, are referred to as “protestors,” making the themes of social unrest and political upheaval immediate to a contemporary audience.

…a celebratory mix of the sacred and profane that is sure to please.

Jon Hudson Odom triumphs in the role of Botticelli. Brash and bold, he’s the life of the party in leather pants and a pompadour that he primps often. Odom wears the character’s sensuality well, capturing the character’s brilliance and his complexity. His discomfort with the Medici patronage is initially played for comedic effect, culminating in a hilariously tense squash match with Lorenzo. Sheltered by power, when confronted by the potential realities of civil unrest, his answer uncomfortably echoes the well-meaning dismissals heard in recent history; “People are educated here,” he demurs to his worried friends.

Earl T. Kim is perfection as Poggio, managing to combine a delightful wit with a voice of reason. A truth teller more in touch with the political scene than Botticelli, he makes the most of his laugh lines. “Friends come and go,” he warns his friends. “Enemies accumulate.” Alyssa Wilmoth Keegan also deserves special mention as Clarice, Lorenzo’s incredibly intelligent, mostly frustrated wife.

Foretelling the unrest to come with a disapproving glare, Craig Wallace enters partway through the first half as Savonarola, an increasingly powerful religious authority. Like many such figures, he foments a rebellion which scapegoats “sodomites” while taking no responsibility for this “people’s revolution.”

As if in protest of his strict dogma, the production creates its own kind of religious symbolism. Colin K. Bill’s precise lighting illuminates figures as though they’re participating in a secret ceremony, and Christian Frederickson’s sound design features quasi-religious chanting. This aesthetic culminates in one of the best scenes of the show, a tender exchange between Botticelli and his mother during which she bathes him in a visual arrangement evoking Michelangelo’s Pietà.

Director Marti Lyons does an excellent job pacing a consistently funny first act (complete with an interstitial featuring Venus herself), darkening into a second half that finds Botticelli and his friends increasingly vulnerable. The sense of unease is amplified by Misha Kachman’s set, notable for its silvery curtains, which dance and glint eerily, foretelling the fires that will burn before the story ends.

Though the play displays the dangers that vulnerable communities face, past and present, the revisionist ending seems to affirm the artist’s right, and responsibility, to rewrite often-ugly historical narratives into new stories. It’s a worldview to take pride in.

Running Time: About 2 hours and 15 minutes with one intermission.

“Botticelli in the Fire” runs through June 24 at Woolly Mammoth Theatre. For tickets or more information, click here.