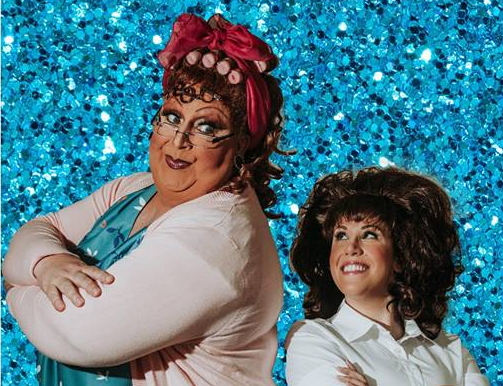 It’s not every day that you see a show of the quality of the Tantallon Community Players’ production of “Hairspray,” directed by Jonathan Jackson. It’s not every month or every year, either. I would say happening upon a production as wonderful as this one is an event as rare—and most certainly as spectacular—as catching sight of an eclipse or a blue moon. This isn’t a show to be missed.

If you’re anything like me, you’ve probably seen “Hairspray” a half-dozen times already, and are not entirely convinced the show can still surprise you. Let me assuage your fears; the Tantallon Community Players production breathes new life into this classic tale. Set in the early 1960s, “Hairspray” tells of a young, heavyset girl named Tracy who aspires to dance on her favorite after-school TV program, The Corny Collins Show, but is rejected at the audition by the bigoted producer, Velma Von Tussle, due to her size. One day at school, she is sent to detention because her hair is too big for her classmates to see over. There, she becomes friends with Seaweed, a black student who dances on The Corny Collins Show once a month on “Negro Day.” He teaches her some dance moves that she then uses to impress Collins, and he grants her a spot on the show, much to the dismay of Mrs. Von Tussle and her daughter Amber.

From there, Tracy gains some notoriety from being on the show and becomes closer with Link Larkin, the show’s heartthrob and Amber’s boyfriend. The two of them, along with Tracy’s spacy best friend Penny, go with Seaweed to his mother’s record shop, where Tracy decides to protest against the segregation of The Corny Collins Show and the racism exemplified by the studio. With her new friends on board, she stages a rally that lands them all in jail, closing the first act with a bang.

If you’re anything like me, you’ve probably seen ‘Hairspray’ a half-dozen times already, and are not entirely convinced the show can still surprise you. Let me assuage your fears; the Tantallon Community Players’s production breathes new life into this classic tale.

Every member of the cast was exceptional in their role. Theresa Cinalli was charming and plucky as Tracy Turnblad. She perfectly embodied the role from the first note of “Good Morning Baltimore,” the show’s iconic opening number, and only continued to impress as the show went on. Amanda Dees played a delightfully villainous Velma Von Tussle, nailing “Ms. Baltimore Crabs,” complete with some baton twirling and a few impressive lifts. The powerful vocals of the three Dynamites, portrayed by Kristal Anderson, Benita Adams, and Maecy Richardson stunned in “Welcome to the Sixties.”

Perhaps the most notable performance of the night was given by Corisa Myers, who played Motormouth Maybelle. An iconic role that has previously been played by Jennifer Hudson and Queen Latifah, Motormouth Maybelle is a challenging role, performing two of the biggest songs in the show, “Big, Blonde, and Beautiful” and the poignant gospel-style ballad “I Know Where I’ve Been.” Myers’s performance of the latter song was quite possibly the best I’ve ever heard it performed and was met with a standing ovation. It is not an exaggeration to say I would pay good money to have a recording of her rendition; it was truly masterful.

One of the best parts of the show was the ensemble. Their spotless execution of Jackson’s stunning, complex choreography truly elevated the production to a new level, and their vocal harmonies were always tight and together. Every number was a joy to watch; highlights include “The Nicest Kids in Town,” “I Can Hear the Bells,” and the iconic “You Can’t Stop the Beat.” The pit band, led by Paul Rossen, was also fantastic.

The costumes, designed by Jackson, were beautiful, colorful, and oh-so-very 60s. I was particularly enamored with Corny Collins’s various sparkly suits, as well as the Von Tussle’s various outfits, which always matched. The wigs, designed by Kristina Kelly, were also phenomenal.

If you have the chance, I strongly recommend taking a trip to see the Tantallon Community Player’s production of “Hairspray.” An ever-relevant show, put on by a tremendously talented cast, this is one production that will stick with you for years to come.

Running Time: Two and a half hours with one fifteen-minute intermission.