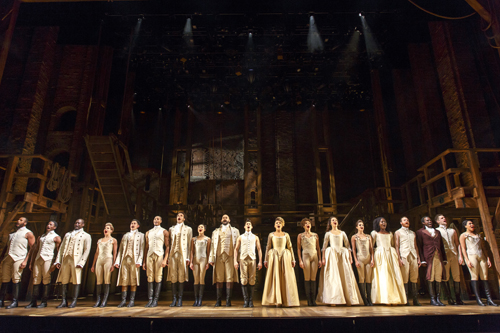 After opening approximately three years ago on Broadway (after a run at The Public) and winning countless awards, including a Pulitzer Prize and 11 Tonys in 2016, are there any more praises that can be heaped on “Hamilton,” Lin-Manuel Miranda’s blockbuster musical? Settled in for a three-month run at Kennedy Center, it lives up to every expectation and much more. It is groundbreaking, Shakespearean, and breathtaking. It is a story of a genius, written by a genius.

The musical, inspired by Ron Chernow’s monumental best-selling biography of Alexander Hamilton, is landing in the midst of another crisis in Washington. Politics of late has seen much of that which our forefathers fought, died, and created being tested to the limit. “Hamilton” is more relevant than ever. As George Washington (excuse the pun, a commanding Carvens Lissaint) says, “governing is hard.” But not surprising, some things never change – rivalries, backroom deals and sex scandals.

Alexander Hamilton is the ultimate immigrant in a nation borne of immigrants. His legacy (a theme throughout the production) and contributions were (and remain) integral to the founding and progress of this young country. After each success, his “frenemy,” Aaron Burr queries about how this illegitimate child – an orphan from the British West Indies with nothing – becomes George Washington’s “Right Hand Man” during the American Revolution, a prolific co-author of the Federalist Papers, founder of the Bank of New York, and the first Treasury Secretary of the United States.

Referred to as the “Angelica Tour,” I cannot imagine that this cast could be anything but an equal to that of Broadway. Every actor, every voice, and every dancer are pure magic.

Austin Scott’s Hamilton is tall, handsome, full of charm and passion. Hamilton also possesses a fiery temper, a healthy ego, and human weaknesses. He stands in contrast to Aaron Burr (the wonderful Nicholas Christopher), the epitome of the slippery politician – also charming with fake smiles and never taking a stand on an issue. He just wants to be in “The Room Where It Happens.” As Burr watches Hamilton’s star rise, there is grudging respect but he also sees him as a political impediment that ultimately leads to tragedy.

In Hamilton’s personal life, the ladies are luminous. He captures the hearts of two of the wealthy Schuyler sisters – Angelica (Sabrina Sloan) who sacrifices her love for him for her sister Eliza’s (Julia K. Harriman) happiness, but still maintains an intellectual bond with Hamilton. Isa Briones plays dual roles as Peggy Schuyler and Maria Reynolds, with whom he had a scandalous affair. This is not the only tragedy that tests the love and marriage of Eliza and Hamilton.

Other actors play dual roles and handle them with equal style. The role of King George is small, but a gem, and Peter Matthew Smith is so much fun to watch.

A huge salute goes to the ensemble. As dancers, singers, taking on smaller roles, and moving set pieces, they are a tightly disciplined unit. The pace of the show is fast, though punctuated with quieter moments. The ensemble flows effortlessly from scene to scene (“Hurricane” is visually impressive), in great part to Andy Blankenbuehler’s energetic choreography that draws from many styles, dazzling lighting by Howell Binkley, and Thomas Kail’s expert direction.

The music is a tapestry of genres, ranging from huge, melodic showstoppers befitting a classic Broadway show to hip-hop. Whether or not you are a fan of rap, in the hands of Miranda, it is poetry. Though at times, it was so fast, some of that poetry was lost. More importantly, it is designed to relate and embrace a younger generation as is the deliberate color-blind casting – a mosaic of the many faces of this country.

The set by David Korins is a wonderful puzzle piece – at one point a staircase is detached, allowing a vivacious Jefferson (Bryson Bruce who also plays Lafayette with aplomb) to ascend a la “Hello Dolly.” The turntable as part of the stage floor is a clever element that creates more movement and depth.

It was worth the wait – a refreshing and exhilarating night of theater!