Theatre Review: ‘How to Succeed in Business Without Really Trying’ at The Kennedy Center 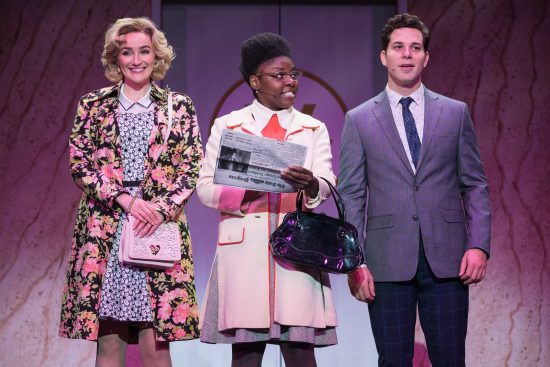 “How to Succeed in Business Without Really Trying” at the John F. Kennedy Center is a delightful, high-energy production that can hardly be described as “semi-staged.” A fabulous cast and first-rate production team bring the whimsical and flirtatious story to life in the ample, but intimate space of the Eisenhower Theater. The singular set design cleverly creates bountiful space for the actors while highlighting the 17-piece orchestra on stage.

The cast assembled is an eclectic mix of newer faces, proven players, and genre-crossovers. As lead, Skylar Astin (J. Pierpont Finch) embraces the clever quirkiness of the iconic role, moving deftly through the snappy dialogue and keeping it wink-wink with the physical humor. As Bud Frump, Michael Urie (a face many know from the popular show “Ugly Betty”) is more overt with delivery and style, but garners a lot of laughs and approval from the audience. Betsy Wolfe (Rosemary Pilkington) exudes down-to-earth charm and has the audience rooting for her successful marital-bagging of Finch. John Michael Higgins is absolutely spot-on as top executive J.B. Biggley.

Though there are hardly down moments to speak of, the highlights come mostly from the peppy ensemble numbers. Choreographer Denis Jones has done an excellent job utilizing the space and designing numbers that pop as much as the score. This and all staging is enhanced by lighting that keeps things bright and embraces the most frivolous moments. The only associated detractor from the production’s effectiveness is the sound mix. The orchestra’s amplification heavily favored percussive sounds, leaving many great horn lines slightly muted. Volume for lead mics were on high, making the tone overly bright and clarity in large ensemble pieces lacking at times.

Albeit the show was likely programmed before the movement began, #MeToo plays an undeniable presence in how a modern audience (particularly one in such a politically-sensitive city) perceives a show that so overtly romanticizes office antics that nowadays would swiftly lead to sexual harrassment suits. Still, even in numbers as salacious as “A Secretary is Not a Toy,” inklings of disapproval quickly wane toward toe-tapping and grins.

As the story progresses, female characters, both leading and supporting, develop strongly and employ their own agency in bucking the corporate culture of the 1960s. This is exemplified through Nova Y. Playton’s (Miss Jones) soaring vocals in “Brotherhood of Man.” Playton steadily plays the stern secretary throughout until given this moment to unleash and wow.

This was the final installment in the Kennedy Center’s inaugural year of their Broadway Center Stage series and demonstrated that even though the format may be new to the house, it can be quickly polished into a spectacular gem. Next season we have to look forward to “Little Shop of Horrors,” “The Music Man,” and “The Who’s Tommy.” Lets hope they knock it out of the park as well as this one did!

Running time: 2 hours and 30 minutes with a 20 minute intermission.

“How to Succeed in Business Without Really Trying” plays at the Kennedy Center through June 10, 2018. For tickets and information, click here.