Theatre Review: ‘Laughter on the 23rd Floor’ at Cockpit in Court 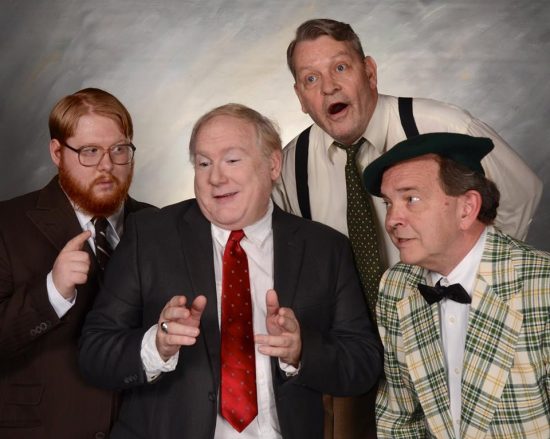 “Laughter on the 23rd Floor” is a very funny account of the inner workings of a comedy writers room in the 1950s. Written by Neil Simon, a former comedy writer for Sid Caesar, the play includes nods to the entertainment industry at the time, as well as the McCarthy-era of blacklisting. Led by Max Prince, the Sid Caesar-esque star of his own variety hour, the writers scramble to put together a show while their leader and star may or may not be going slightly mad.  Hijinks, joke-offs and sketch comedy ensue.

The story is told through the eyes of Lucas Brickman – a young writer who joined the staff 3 weeks ago. Brickman, as played by Ja’min Williams, is earnest and eager to become part of the team. Williams provides the heart for the show. Through his eyes, the audience can see just how crazy the other writers are, but also just how much Lucas wants to be a part of the club. The leader of the writers’ club is Val Slotsky, played by Chris Cahill. Cahill’s work seemed effortless in the best way. Whether it is the Russian accent or the easy way in which he embodies Slotsky’s mannerisms, he seems the most natural character on stage. It is easy to see him as the funniest Russian émigré to immigrate to America.

These small touches, added to set pieces like a rotary phone or Time magazines and newspapers strewn all about the stage, help transport the audience to a time in New York where comedy was king and NBC ruled most television sets.

Another standout in the cast is John Dignam as Milt Fields. In a room full of actors playing very talented comedy writers, it’s hard to make a single writer shine. But Dignam’s Milt spends most of the show cracking quick and breezy one-liners wearing hilariously outlandish suits. Milt is a guy everyone wants to swap stories with, and Dignam’s dedication to slapstick helps that quality shine. As the boss and the man every comedy writer wants to be, Max Prince (as played by Toby Hessenauer) is manic and slightly unraveled. Prince was once played memorably by Nathan Lane, and in Hessenauer’s work I see a lot of the brashness and bravado that Lane brings to each comedic part he plays. Hessenauer plays Prince as a man come undone, and when it comes to literally destroying a part of the set, Hessenauer goes all in, creating one of the funniest sight gags in the show.

The set that is literally destroyed a bit during each performance, is located in a small cafeteria creating a theatre in the round experience for audiences. Because the writers’ room is usually an intimate space, seeing the piece like this allows the audience to feel like they’re living in the room with these masters of comedy. It’s a fun way to become part of the action, even though at times bits of that action is blocked by a few of the actors. Yet another creative touch to the piece are the period costumes beautifully designed by Eva Grove. The men’s suits are perfectly vintage. The actors wearing them appear as if they have just stepped out of a Sears catalog in 1953. The women’s dresses are practical for daytime and perfectly chic for a New York City Christmas party.

These small touches, added to set pieces like a rotary phone or Time magazines and newspapers strewn all about the stage, help transport the audience to a time in New York where comedy was king and NBC ruled most television sets. The actors and creatives have designed a pleasurable evening allowing audiences to sneak a peek at what made these variety shows so new and so grand. Thanks to the strong work by the actors on stage and director John D’Amato, “Laughter on the 23rd Floor” provides a thoroughly engaging outlet for audiences to share and laugh, just as the Max Prince show would have done all those years before.