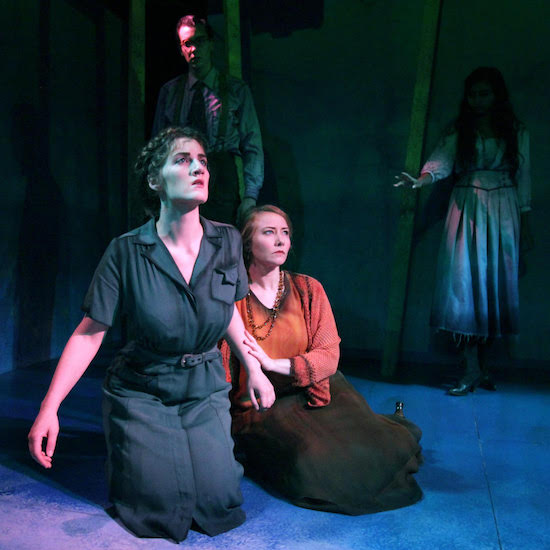 Caroline Preziosi and Kerry Brady in the foreground. Photo courtesy of Annex Theater.

Charlotte Salomon (Caroline Preziosi) was an artist from a well-off family living in Berlin through the rise of the Third Reich. Her family was Jewish. Less than a year before being captured by the Nazis and gassed in Auschwitz, Salomon poisoned her grandfather and drew his portrait as he died.

How could a talented young woman commit such an act? “Life or Theatre?”, written and directed by Carly J. Bales, attempted to answer, illuminating Salomon’s life by examining her art.

Through the performance, we learned the following: though a prolific, brilliant artist from childhood, Salomon’s work went unappreciated by her family. Suicide and unaddressed mental illness haunted her family — Charlotte was named for her mother’s sister, the “First Charlotte,” who drowned herself in a lake. And, the setting was 1930s Berlin. The Nazi regime was on the rise, and the Salomons were Jewish.

The show, like Salomon’s body of work, was highly visual. Three digital panels behind the actors played an almost constant loop of vintage footage of mountains, fields of flowers, city streets, children having a pillow fight, water, and old-fashioned silent film narration.

But, Bales never actually showed Salomon making art. Instead, we heard other characters discuss, criticize, minimize, or deride it. When Salomon wanted to quit school to paint, just after Adolf Hitler was appointed Chancellor of Germany, her opera singer stepmother (Kerry Brady) questioned her, “What kind of life would that be?”

Later, a friend of the family, Daberlohn (Jacob Zabawa), told Salomon, “I want you to illustrate my novel.” He was teasing her — he knew she adored him. After he left, the ghost of First Charlotte strode on stage and mocked Salomon for the hundreds of paintings she made of Daberlohn. “Do you think you’re making meaning?” she sneered at the teenaged girl.

Instead, Bales showed us the motivation, the emotions, the artist behind the pieces, without distracting us with the creative act itself. The paintings were merely byproducts of the true art: Salomon’s development into herself.

…Bales showed us the motivation, the emotions, the artist behind the pieces, without distracting us with the creative act itself.

Still, for a narrative about an artist’s growth, I wished Bales had presented us more of Salomon’s portfolio itself — especially given the capabilities of the digital backdrop. Only once did this happen, when Salomon observed Paulinka “singing” opera — the actress opened her mouth in a capital “O” while a scratchy recording of an opera singer was piped in. The real-life Salomon’s gouache of Paulinka appeared on the three digital panels. Her eyes were orange, her face brushed with sunset hues; greens and blues and deep reds swirled around Paulinka’s head like wild, curly hair or seaweed. Seeing the scene and the portrait side by side offered a revelatory glimpse into how Salomon translated life into art.

Surasree Das gave the standout performance of the night as First Charlotte, Salomon’s namesake. “Life or Theatre?” opened with Das quietly stepping onto center stage and reenacting First Charlotte’s drowning of herself while a marshy lake flickered on the digital panels. She personified the Salomon family curse. When she strutted, cackled, or screamed, she looked demonic. When she watched another relative take her own life, her sad eyes lost their light.

Intended or not, the performance shed light on the importance of seeking treatment for mental illness — services almost certainly unavailable to the Salomon family in Nazi Berlin. Seven members of Salomon’s close family committed suicide. Anyone of them would have been tragic; seven is unimaginable.

If you or someone you know needs help, the National Suicide Prevention Lifeline number is 1-800-273-8255. You can also text HOME to the Crisis Text Line at 741741. There are trained professionals and volunteers standing by 24/7.

Advisory: This program contains mature content (death and murder) and is not recommended for children.

“Life or Theatre?” plays through June 17, 2018, at Annex Theater in Baltimore, MD. Tickets may be purchased online or at the door.