Theatre Review: ‘On The Town’ at Olney Theatre Center 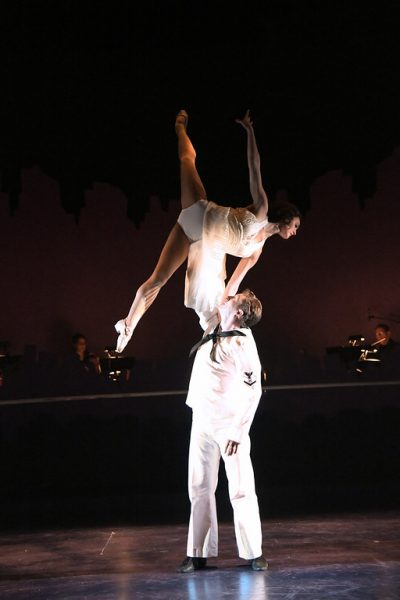 The dancing in the Olney Theatre production of “On The Town” is a delicious gift from the heavens. The voices are a wonderful gift as well, and hearing so many DMV theatre favorites in one show is a rare treat, but the dancing is just the final touch that elevates this show as the theatre season winds down. Tara Jeanne Vallee choreographed this production and the dancing is so good it nearly deserves to be named as a role in the cast bios.

“On The Town” is a girl-meets-boy-times-three love story, set in 1945 in New York. A U.S. Navy ship is in and the sailors are anxiously awaiting 24 precious hours of liberty. The plot follows three buddies (Chip, Gabey and Ozzie), all of whom are hoping for a memorable “big city” experience—with beautiful girls of course—in their quest for love and adventure. In particular, one of them, Gabey (Rhett Guter), becomes obsessed with finding Miss Turnstiles; even better, he convinces his two buddies that they can combine helping him find Miss Turnstiles with their own quests for love/dalliance and sightseeing. Given that in 1945 New York City the population was around 7.5-7.6 million, and he wants to find one pretty girl in that crowd, that is an amazing selling job.

The dancing … is a delicious gift from the heavens.

What makes this more enjoyable than some revivals is that the girls get to have fun too. As Hildy Esterhazy (Tracy Lynn Olivera), a libidinous taxi driver who meets and basically kidnaps Chip (Evan Casey), Olivera gets to show off her comedic timing and use that magnificent voice at the same time. (Chip wisely decides that being with Hildy is a wonderful use of his time in the city.) Rachel Zampelli, who plays Claire DeLoone, gives a heartfelt performance of a bluestocking that discovers the physical side of the human species when she meets Ozzie (Sam Ludwig) at the Natural History Museum, falls for his head shape, and then rapidly decides to begin exploring the rest of his anatomy, even in front of her much older fiancé, Pitkin W. Bridgework (reliably played by Bobby Smith, among myriad other roles).

Donna Migliaccio (Madame Maude P. Dilly and others) is the character that sets up the obstacle between the two main lovers. For this sin, she has the privilege of appearing onstage in fairly quick succession in Act II as a series of singers all singing the same song in different nightclubs. In noticeably different costumes and wigs—it’s a very funny bit.

As Miss Turnstile, aka Ivy, Claire Rathbun provides a solid emotional foundation to a rather stock character—the young person who slams into town fully prepared to conquer, but then it doesn’t quite work out that way. Her dancing fully embodies the loneliness, hope and questioning of a young woman who has learned the hard way that she’s not that special and she’s had to compromise in order to survive in a very tough city.

She is beautifully partnered by Rhett Guter as Gabey. Whether they are dancing together but apart in “Lonely Town” in Act I or dancing together in the pas de deux to “The Dream Coney Island” in Act II, he matches her prowess and feeling all the way. For two people who have less time together on stage than anyone else, when they speak with their bodies in the dance, it gives one hope for their future.

The 14-piece orchestra is skillfully conducted by Christopher Youstra, even if the placement of the orchestra at the back of the stage, separated by a shortish wall of a city scene, was a bit awkward. The costumes by Rosemary Pardee are gorgeous and beautifully of the period.

While the first act was a bit slow at times, and several items were dropped/fell off during scenes, sooner rather than later came the songs by Leonard Bernstein and the choreography (originally by Jerome Robbins; in this production by Vallee) that lifts this show to a must-see level. It also helped that Act II was much tighter in focus and just zoomed along—much like the final hours of their 24 hours leave in New York City.