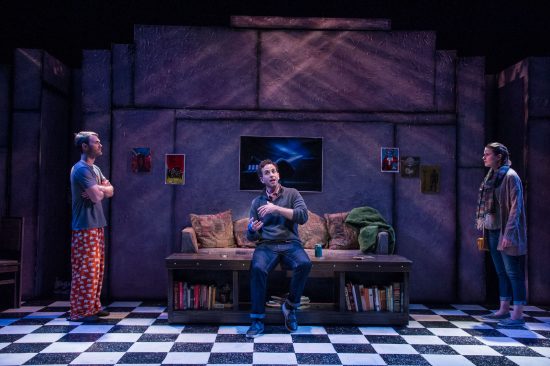 “Other Life Forms,” now playing at the Keegan Theatre, is a profound examination of what it means to be human, as seen by someone who (probably) isn’t. The world premiere by Brandon McCoy, directed by Shirley Serotsky, has the rare charm of being both thoughtful and funny, prompting both laughs and questions in equal measure.

The play tells the story of Ben (Josh Sticklin) and Jeff (John Loughney), two roommates who decide to go on blind dates as a result of online dating profiles. Ben is coming off a year of being single after breaking up with Leslie (Brianna Letourneau), and Jeff – well, let’s just say Jeff is kind of out of this world. He announces that Ben is his personal mission, and chaos, hilarity and a ludicrous number of coincidences ensue—including the fact that Jeff’s blind date happens to be Ben’s ex-girlfriend Leslie, who shows up at their apartment completely unsuspecting that Jeff is trying to force some kind of closure.

“Other Life Forms” gets off to a slow start, but it’s worth it. The first act feels more like a series of sketches, split between two couples on first dates in two different restaurants. The date between Ben and Molly (Shanta Parasuraman) is incredibly painful to watch, though that’s a testament to the two actors. It’s the epitome of a first date gone wrong—the man ordering for the woman without asking about her dietary preferences, both harping on each other’s ideology (one is a libertarian, the other a vegetarian, and neither is OK with it). The sheer discomfort of watching these scenes is broken by moments of levity provided by the waiter (Aidan Quartana), who tries (fruitlessly) to mitigate some of the awkwardness and, later, the full-blown conflict. By contrast, the date between Jeff and Leslie is easy, and frequently funny, though there’s a brief moment of concern when Jeff seems to imply that the date is more like a sociological experiment. Interestingly, the second act proves this to be more true than initially thought.

It [‘Other Life Forms’] asks questions about the meaning of life, love, and reality, and does it all with a smile and a good sense of the absurd.

A piece like this, founded on a rather bizarre premise, succeeds chiefly on two things: the strength of the writing and the ability of its actors. Fortunately, while the writing seems unnecessarily didactic and somewhat clunky in earlier scenes, the play’s examination of the human condition becomes downright charming in the second and third act. The acting is excellent on all counts. Particularly dazzling is Loughney’s ability to switch gears instantly and utterly, starting in the second act. Even his body language changes and the moments when he breaks the fourth wall are startling and hilarious. Sticklin and Letourneau, as the former lovers confronting their difficult past, are so real it sometimes hurts to watch, especially as they begin to talk about what drove them apart in the first place. Parasuraman, as a bewildered and frustrated (and surprisingly vulnerable) woman on a disastrous date, and Quartana, as an unwilling and bemused witness to this chaos, are completely invested and equally funny.

Matthew J. Keenan’s set design, which initially seemed fairly unassuming, was surprisingly versatile. The back wall looks like a grayscale Mondrian painting, all stark shapes in shades of gray, while the floor is black and white tile like an old diner. In the first act, the initial centerpiece is a rectangular booth with low-backed seats, almost like what one might find in a club—but the wall rotates, changing to another restaurant setting, and switches between the two for the first act. In the second act, the booth is replaced by a couch, and in the third, the far side is made into a small, intimate coffee shop setting.

In all, while “Other Life Forms” starts slow, it’s worth sticking with, and overall winds up being fairly funny and exceptionally profound. It asks questions about the meaning of life, love, and reality, and does it all with a smile and a good sense of the absurd.

“Other Life Forms” is playing at the Keegan Theatre in Washington, D.C., through July 7. For more information, click here.