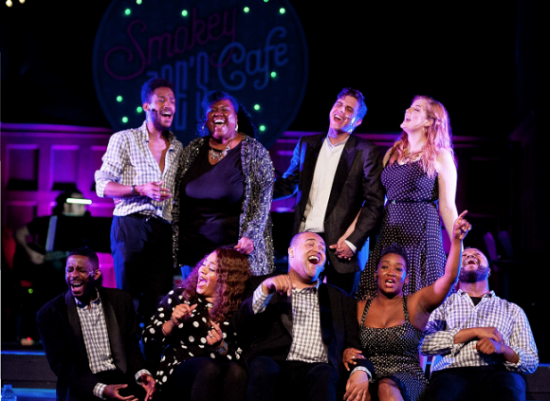 “Smokey Joe’s Café” has been kicking around stages both on Broadway and in the hinterlands for more than 20 years.  I’ve seen it a number of times – but never like the version that Arts Centric currently has running right here in Baltimore.  This is one hot show.  If it’s smoky in there, it’s because this troop is burning up the stage.

“Smokey Joe’s Café” is a revue comprised of 39 of some of the most familiar songs of the late 50s and 60s, written by the incredibly prolific songwriting team, Jerry Leiber and Mike Stoller. Leiber and Stoller were able to capture in tune after tune the zeitgeist of the period with their songs that spanned genres from pop to rock to soul and everything in between.  The revue is strung together in typical jukebox musical fashion with no dialogue or plot lines.  In this exceptionally clever version helmed by the Misters Kevin McAllister (director) and Cedric Lyles (musical direction), stories get told – some writ larger than others, but all terrifically entertaining.

There are so many smart choices made by McAllister on display here that it would be an opus rather than a review if I were to list them all.  Bringing the show in at around 2 hours, songs progress smoothly, sometimes not even pausing for the much-deserved applause before moving right into the next number.  Whole scenes are created based on the song lyrics, sometimes just an emotion, sometimes much more developed than just a simple telling.  McAllister is able to pace the show with superb timing, revving up the rock and roll action to a fever pitch, then leaping off into a smooth pop number with the flexibility and execution of a high-wire artist.  Characters come to life through the songs, exhibiting the basics like love, hate, anger, joy, gratitude, attitude, hope, despair and acceptance.  Who knew these songs had so much to them?  Obviously, McAllister did. And mixing the cast amongst the audience for the entire show makes for a seamless, interactive atmosphere that was delightfully different.

Musical director Cedric Lyles has apparently never met a score he couldn’t improve on.  I’ve seen the show locally and on Broadway, and Lyles’ arrangements are on par with the most professional of them.  He adds layers to the harmonies, colors to the jazzy arrangements, and keeps it all percolating like a hot, black pot of coffee.  With himself on keyboards, Kevin Ellis on percussions and drums, Charles Thompson III on bass and Jaime Ibacache on guitar, this little band of badass musicians kept us bouncing and clapping along so hard we were working up a sweat.  The harmonies from the ensemble couldn’t be better and the individual performances were well coached and rehearsed under Lyles’ tutelage.

‘Smokey Joe’s Café‘ is a fun, bright evening that should be savored with abandon – head thrown back, hands in the air, butt wiggling in the seat and a big grin at the sheer enjoyment of it.

Performing groups usually have to build a set, of course.  But not many have to actually build a theatre.  “Smokey Joes Café” is more than just the title of a show – Arts Centric has made it an actual place, a real, live, functioning café, complete with a thrust stage, a bar, café tables, food for sale, and the ambiance reminiscent of what the old Harlem cafes in the 50s might have been like.  Commandeering the upper floor of Emmanuel Episcopal Church on Cathedral street, which was essentially a large, barren hall, they have re-imagined the space beautifully thanks to the artful set design.  Set design doesn’t actually cover what they have constructed.  This is way more than that.  And it works beautifully. Set designer Jimmy Stubbs, lighting designer Helen Garcia-Alton and costume designer Nicholas Staigerwald are all wonderful at what they do for this show.  A little more use of the spotlight on the soloists might have been nice (frequently had to crane around to see who was singing where) but that’s a small point.  The lively choreography was expertly danced and amplified the music exactly the way it should.  Hats off to Ashleigh King.

It’s rare that audiences can see the camaraderie of the performers in a setting as intimate as this one.  These folks all seem to genuinely enjoy performing together.  They are so generous in their support of each other that it is no wonder they come off as more of a family than a group of disparate actors sharing a stage.  The uptempo group numbers have an infectious energy that put a smile on the face of everyone in the room.  From the opening number, “In The Neighborhood” to the closing, “Stand By Me”, this group functions like a single unit comprised of nine perfectly meshed parts.  Bryan Jeffrey Daniels, Kelli Blackwell, Edwin Santiago Perez, Kylie Smith, Ricardo Blagrove, Shayla Lowe, Derrick Truby, Jessica Bennett, and DeCarlo Raspberry each deserve a paragraph – no, a page – of praise for outstanding work.  Remarkably, every number in the show works so well that it is hard to single any one of them out.  Daniels’ drunken “D.W. Washburn”, the female ensemble in “W.O.M.A.N”, Edwin Santiago Perez’s high energy “Jailhouse Rock”, Kylie Smith’s shyly engaging “Falling”, Kelli Blackwell’s soul-stirring high notes, Jessica Bennet and Kylie’s sultry rendition of “Some Cats Know”, the boys singing “Keep On Rolling” and “Searching”, and I could go on and on.  But let’s just agree that this cast can sell a song – all the songs – like nobody’s business.  And we’re buying.

This is why we go to the theatre in the first place – to see fantastic performers doing what they do best.  Entertainment at its finest.  “Smokey Joe’s Café” is a fun, bright evening that should be savored with abandon – head thrown back, hands in the air, butt wiggling in the seat and a big grin at the sheer enjoyment of it.