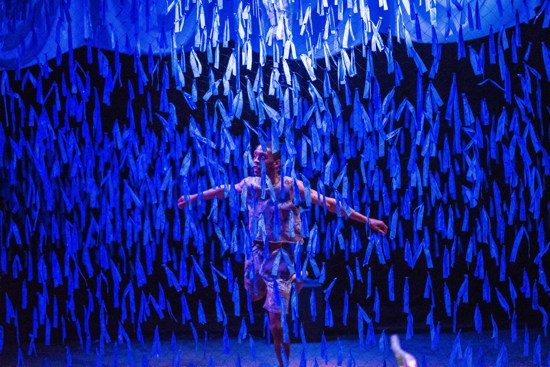 Nate Shelton in Swimming with Whales at 1st Stage. The show runs through June 24, 2018, in Tysons Corner. Photo by DJ Corey.

In Bob Bartlett’s languid “Swimming With Whales,” now playing at 1st Stage, one gets the sense that death is the sixth character on that stage. We have three adults, one 15-year-old boy, and one young whale, all of whom are alive. Death is well represented, however, in the form of past death and imminent death and possible death. But sometimes death is a good thing, such as when you let old grudges and fears die. Death is complicated.

This is a gentle, and ultimately hopeful, play considering that death permeates it.

The story opens in late August 1983 when Anne and her son Owen come to the southwestern coast of Nantucket Island to say goodbye to an old friend of Anne’s. The deceased friend had been a partner of Patrick’s who had been Anne’s lover and is the father of Owen. Grace, who is now a sheriff’s deputy, is the other member of this old group of friends. Owen and his mother (now a lawyer) live in Boston, but for a year or two after his birth, he had lived in the cottage that Patrick lives in; in fact, all four friends had lived there together in a spirit of community. While Anne and her son had never been back, she had kept in touch with the others. Owen initially refuses to get out of the cab, then refuses to touch sand, and will barely even look at the sea. Owen has cancer and he is angry—at the cancer, at his father for his non-involvement in his life, at his mother (because he IS 15), at life itself. But then something magical happens—a young whale, Ketos, who may also be ill, has been hanging around offshore since the death of Patrick’s partner and reconnects with Owen. Owen is actually willing to acknowledge this relationship and it leads to unexpected epiphanies within the group.

As Owen, Ethan Miller gives a brittle, believable portrayal of a 15-year-old boy facing mortality, and not always gracefully. He is bright, sarcastic, funny, prudish (the sight of his father’s naked backside nearly does him in), and raging against the hand life has dealt him. He shines in this role.

As his mother (and Boston lawyer), Ann, Teresa Castracane is the epitome of a shell-shocked single mother trying to keep things as normal as possible while not letting her heartbreak show. Jessica Lefkow as Grace and Matthew R. Wilson as Patrick are perfect in their roles of ex-hippies, one of whom has almost stereotypically gone all law and order (but with a heart) and the other who can’t fathom living anywhere but where he is; the sea gives him life.

As the whale, Ketos, Nate Shelton, has an odd role. In certain sequences, he and Owen, who won’t even touch the water, meet at the bottom of the sound and converse while Ketos gently drifts around him. It is a very enigmatic role, and Ketos plays it with a beautiful blend of aloofness, wisdom, and compassion.

This is a gentle, and ultimately hopeful, play considering that death permeates it. The pacing seems to take its lead from the timelessness of sea and sand—it ebbs and flows and pushes and pulls and sparks up and subsides. Director Alex Levy wisely lets the susurration the sea, which is instinctive to human development, set the pace as these four people reaffirm their bonds and find other paths together and separately.

The set is designed by Kathryn Kawecki; it is divided into the sea bottom and the seashore through the imaginative use of beautiful blue streamers which sway and change with the lighting.

Written by Bob Bartlett, “Swimming With Whales,” is having its world premiere at 1st Stage. It was a winner of the Kennedy Center American College Theatre Festival’s Mark Twain Prize for Comic Playwriting and was a finalist for the Kendeda National Graduate Playwriting Competition at Atlanta’s Alliance Theatre.

Advisory: Brief nudity; some drug use on stage; adult language.

Running Time: Approximately two and a half hours with one 15-minute intermission.