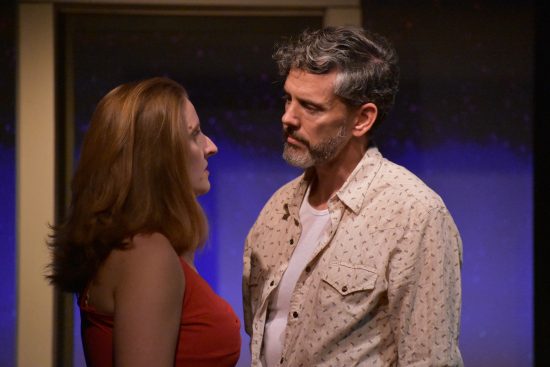 Francesca (Elisabeth Hester) and Robert (Chad Wheeler) at the precipice of a decision that will change both their lives, in Damascus Theatre Company’s production of “The Bridges of Madison County,” now playing at the Gaithersburg Arts Barn. Photo by Elli Swink.

“Love is always better.” This line takes many meanings in the musical adaptation of the iconic film, “The Bridges of Madison County,” now playing through June 24th at the Gaithersburg Arts Barn.

For those unfamiliar with the 1995 film starring Meryl Streep and Clint Eastwood, “Bridges” is the story of a forbidden love affair between unhappy housewife Francesca (Elizabeth Hester) and nomadic photographer Robert, in 1965 Iowa. Francesca, an Italian immigrant, is looking forward to a few days of peace while her husband Bud (Bob Schwartz) and two children Michael (Payton O’Keefe) and Carolyn (Sophia Anthony) go to the Iowa State Fair, leaving her with the farm to herself. Then a strange truck comes up her drive; it’s Robert, looking for directions to one of the famous covered bridges in the area, so he can photograph it for National Geographic. While his presence raises the eyebrows of her neighbors Charlie (Hugh Gordon) and Marge (Liz Weber,) Robert’s presence is innocent enough… at first. But the more time they spend together, the more they can’t deny the chemistry and connection between them.

Damascus Theatre’s production of “The Bridges of Madison County” is a passionate and accomplished piece of theatre.

Over the course of beautiful country drives, home-cooked suppers, and later, passionate nights, they open themselves up to each other. Robert talks about his failed marriage (which is presented by a young version of his wife, Marian, played by Caitlin Connolly). Francesca shares her story of losing her young fiance in the war, and with him, all her hopes and dreams for the future (presented in a dance with Laura Searles as the young Francesca.) As the hours tick by, and their connection deepens, Francesca is faced with a terrible choice that will affect everyone’s lives forever.

Famed Broadway composer Jason Robert Brown wrote the music and lyrics for “Bridges,” and this reviewer noticed his style and signature rhythm and rhymes from the first lines of the opening song, “To Build a Home.” He is most known for his Tony-award winning musicals “Parade” and “The Last Five Years,” as well as his off-Broadway masterpiece “Songs for a New World.” “Bridges” ran on Broadway from January 17th 2014-May 18th 2014, closing after 137 performances.

Damascus Theatre’s production of “The Bridges of Madison County” is a passionate and accomplished piece of theatre. The entire cast is incredibly talented and it made for an effective performance of a bittersweet and wistful musical. Hester does a fantastic job as Francesca, imbuing her with longing and desire. Her voice was lovely and successfully navigated the sometimes difficult score. She got the show off to a strong start on the opening number, “To Build a Home,” setting the stage for the events to come. Her lilting Italian accent was also impressive, staying consistent and believable throughout, and even whispering in her singing voice. Her acting was also strong, most markedly during the scene where she rode with Robert to the bridge in his truck. She made the character go from uncomfortable in the strange man’s presence, to become utterly captivated by him.

Wheeler transfixed as the lonely and enigmatic Robert; he made it easy to understand how Francesca fell for him so quickly. His incredible voice soared in this role, particularly in “The World Inside a Frame” and “It All Fades Away.” Hester and Wheeler have incredible chemistry, both on the stage and vocally. Their performances of “Falling Into You,” and “Before and After You/One Second and a Million Miles” were transportive and sensuous. They also very successfully represented the feelings of this couple – from uncomfortably romantic tension at the start, to unbridled passion.

The rest of this cast was also very talented as well, each holding their own in an emotionally charged and challenging show. Schwartz impressed as Bud, bringing a depth to the character that made Francesca’s situation that much more fraught. His voice was excellent, and he did a great job showing Bud’s emotional journey. Anthony and O’Keefe also delivered solid performances, very accurately representing the delicate balance between love and annoyance between siblings. Weber was charming as Marge, providing some comic relief, but also real and poignant support of her friend Francesca. Her performance of “Get Closer” was a highlight of the first act. Gordon was equally convivial as Marge’s husband, Charlie, providing more than a few laughs, and a fantastically bluesy version of “When I’m Gone.” Searles did a great job in a few roles, including an impressive performance of “State Road 21/ The Real World” where she both sang and played violin. She also utilized her dancing skills in the highly effective flashback sequence as the younger version of Francesca. Finally, this reviewer felt that Connolly stole the show with an incredibly beautiful and emotional performance of “Another Life.” Her mellifluous voice was haunting and was a standout moment in a strong show.

The technical aspects of this show were also well executed. One of the things I love about this venue is that because it is so intimate, microphones aren’t needed. While it is fantastic to hear these excellent voices without amplification, it can be difficult to get a good sound mix. Vitol Wiacek (Sound Design) and Scott Richards (Conductor) did a great job creating an effective sound mix that supported the talented cast and orchestra. Bill Brown’s set design was also effective, especially at the beginning. The opening of the show was just Francesca standing on an empty stage with a projector behind her showing pictures of Iowa, which really set the tone of the show. The cast moved set pieces to make expert use of the limited space, and it was historically accurate looking for the 1965 setting of the show. The lighting had some problems, with some of the transitions seeming a bit abrupt, but nothing too serious or distracting. Finally, the costuming done by Carol Boyle was excellent. She was able to mirror Francesca’s journey with her clothes; starting out bland and conservative, and then showing the turning of the tide of her feelings for Robert with a fiery red dress. After that dress, and that night, while her dresses were still a bit more conservative, they were bright with color and pattern, representing her new found passion and joy. The other costumes were great as well, being very representative of the characters.

Overall, Damascus Theatre Company’s production of “The Bridges of Madison County” is well-crafted and cohesive. Director Stephanie Bonte-Lebair did a fantastic job of casting an immensely talented group of performers, guiding them to an amazing place, and combining their performances with a strong technical team. There is still one weekend left of the run – I’d recommend seeing “The Bridges of Madison County” before it is gone.

Advisory: Due to the adult nature of this show, including partial nudity and sensuality, “The Bridges of Madison of Madison County” is recommended for audiences 17 and over.

“The Bridges of Madison County is now playing at the Gaithersburg Arts Barn through June 24th. For more information on tickets, click here.