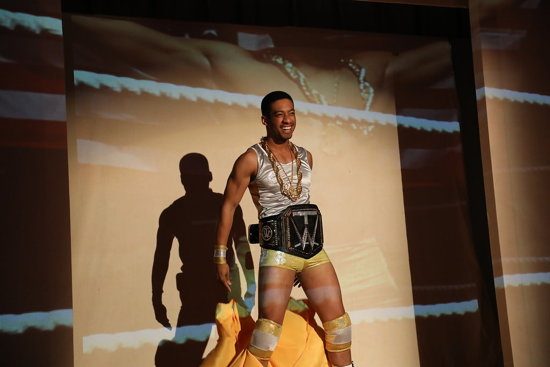 “The Elaborate Entrance of Chad Deity,” written by Kristoffer Diaz and directed by Daniel Douek takes to the mat at Cohesion Theatre. The first few minutes are pumped full of testosterone and excitement as the audience is introduced to the wrestling world of Diaz.

…Cohesion Theatre and MACE’s character shows what’s underneath all of the lights, videos and sounds – an intelligent story with heart.

In his world professional wrestling, there are the colorful characters I would expect, like wrestlers with names like Bad Guy, Billy Heartland and Old Glory (all played with enthusiasm by Fred Fletcher-Jackson), but the audience is also treated to what is under the showmanship of flashy costumes and pile drivers. A Puerto Rican man called Macedonio Guerra or MACE, for short, (Christian Gonzalez), begins a monolog by describing growing up captivated by pro wrestling. MACE now finds himself involved in the world, but as the guy paid to lose to their real star, Chad Deity (Tim German).

Chad Deity is set up to never lose even though he has no real talent and couldn’t win a round on his own and German gives his all to this role. Flashing his thick gold chain and championship wrestling belt, he fills the stage with his muscles, tight gold short shorts and stage commanding style (costume designer, Helenmary Ball).

We meet V.P. (Vigneshwar Paduar) next, played by Jehan Sterling Silva, who is a young Indian from Brooklyn and hustles his way through the streets. MACE meets him and takes V.P. to meet the boss of the wrestling, E.K.O. (played by a Trump-like Jason Hentrich). E.K.O. likes what he sees and decides their audience would love to see “The Fundamentalist” fight a wholesome all-American boy with MACE, dressed up in a wide sombrero and a Mexican blanket vest, serving as V.P.’s “detestable” sidekick. Obviously, the use of stereotypes is not subtle in this play and wrestling is a great over-the-top backdrop to showcase prejudices that are still alive today. And refereeing all of this amusement is a stern and even Matthew Casella.

“The Elaborate Entrance of Chad Deity” is basically told through monologs with winners and losers and ultimately showing its audience who the true winner is. This show can’t be done without good video and light production, and Serafina Donahue (Lighting Designer/Projection Designer) and Jehan Sterling Silva (Video Creation/Editing) easily bring the excitement and feel of real wrestling matches. The wrestling moves are well done and convincing thanks to Joseph Grasso’s training and Jonathan Ezra Rubin’s fight choreography.

Although this play, on its surface, is about pro-wrestling, Cohesion Theatre and MACE’s character shows what’s underneath all of the lights, videos and sounds – an intelligent story with heart.

“The Elaborate Entrance of Chad Deity” plays Fridays and Saturdays at 8 pm, and Sundays at 4 pm through June 17, 2018, at The Fallout Shelter at United Evangelical Church, 923 S. East Avenue, Baltimore, MD. For tickets, purchase them online.